Who Are We Anyway?

The Power of Connection: Join us for a discussion based on this exhibition, exploring the power of personal interaction in dispelling myths surrounding refugees and their situation.  It will be facilitated by artist Jolyon Hoff and include insights from Dr David Corlett, host of Go Back to Where You Came From, as well as recent refugees and those working with asylum seekers. 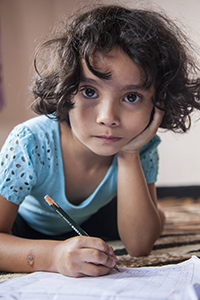 This exhibition was launched by His Excellency the Honourable
Hieu Van Le AO, Governor of South Australia.

This is a joint project presented at the Kerry Packer Civic Gallery and Nexus Arts from 17 March – 28 April 2016.  The exhibition is curated by Jolyon Hoff.

The installation is based around, and follows, the lives of a small group of mainly Hazara refugees living in Indonesia. In the middle of a dangerous journey they have started a refugee school, the Cisarua Refugee Learning Centre, and a fragile community is forming around it.

The different elements; photography, films and social media channels, have been collaboratively developed and choreographed, each providing a different yet interactive and interdependent perspective on the community. The installation will weave these elements together within and between the physical space of the two galleries, surprising and challenging the audience’s preconceptions, and exploring the interrelating themes of the work. 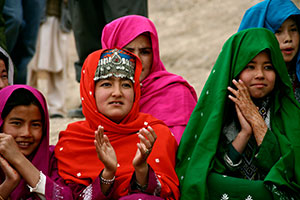 The work expresses the friendship and connection developed between the three artists over the past 2 years. It represents their different cultural perspectives, and the possibilities that exist for communication and understanding between the Hazara refugee and Australian communities. 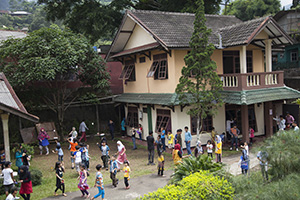 Muzafar Ali’s photography and short essays about the Hazara people, in Afghanistan and in transit, express his love for his homeland, Afghanistan. They also reflecting the harsh realities of that land, and the desperate journey of those who have been forced to leave.

Printed in large format by Atkins Photography, and presented around the walls of the Kerry Packer Civic Gallery, they provide the stunning visual backdrop for the community, and a context for their desperate journey.

Visual loops
Over the past two years Jolyon Hoff has filmed voyeuristic and intimate video footage in the refugee community in Indonesia. Surrounded by Muzafar’s photographs, the clips and interviews will be presented over screens within the Kerry Packer Civic Gallery. The 530min loops will provide the audience with a visceral experience of both the banality and desperate reality of the refugees’ lives.

Interactive Online Channel
#KhadimReports is an online channel presented by Khadim Dai, a 19 year old refugee living in Indonesia. He makes short films, and is active on twitter, facebook and other social media. Presented primarily at the Nexus Gallery, the exhibition and channel presents the refugee community in the same online space that Australians exist, and provides the audience with a chance for realtime communication with the refugee community.

About Jolyon Hoff
Jolyon Hoff is an Australian filmmaker and emerging visual artist.  Fascinated by culture and community, his subjects have included a schizophrenic Australian surfing icon, computer gaming programmers in America, an eccentric football fan, and traditional Kings, Chiefs and Yoruba rituals in Nigeria. His works explore themes of belonging, community and the role of leaders in those communities. They question how these ideas are constructed to both join and divide communities across the world, and what they mean to the people within those communities. When he drove to Cisarua he discovered the most fragile of communities searching for identity, meaning and safety.  He holds a BA in Communication Studies from Newcastle University and a Masters Degree in
Documentary Directing from the Australian Film, Radio and Television School, where he received the Film Australia Award for the “most significant achievement in the art of documentary”.

About Muzafar Ali
Muzafar Ali has been taking photographs since 2005. Inspired by his work travelling to remote Afghanistan as a political advisor for the United Nations, he spent his first month’s pay packet on a camera.  Since then he has photographed people and places from his homeland in central Afghanistan, or Hazarajat. As a member of the Hazara ethnic minority, he shares the joy and pain of the people he photographed and, when forced to leave Afghanistan, he continued to photograph this community living as refugees and asylum seekers in Indonesia. His photographs explore ideas of belonging, displacement and identity, and have been exhibited in major cities in Afghanistan, South Korea, Canada, USA, Australia and Holland.

About Khadim Dai
Khadim is a cofounder of the Cisarua Refugee Learning Centre. He has been living as a refugee for most of his life. First he moved from Afghanistan to Pakistan, where he became a national karate champion. Then, when a bomb destroyed his school and killed 126 people, with some money and a phone number stitched into his underpants, he smuggled himself to Indonesia. He was trying to catch a boat to Australia when his sister rang and told him the Australian Government had changed the laws. He went back to live in Cisarua, a small town outside of Jakarta. He is on the adventure of a lifetime and has been filming it on his mobile telephone. Since returning to Cisarua he has chaperoned SBS and ABC journalists, attended the ANZAC day dawn service, met the Australian ambassador, made friends with an Oscar winning filmmaker, won an award at a film festival in New York and has been offered a scholarship to an University in Australia (It’s unlikely he can take up the offer without travel documents). “I was waiting for someone to come and film me and my friends. To film about our lives, but no one came. I want to raise up our voice, my peoples’ voice, my voice”.  Khadim Dai