Dignity and justice for all of us
19 January - 6 March 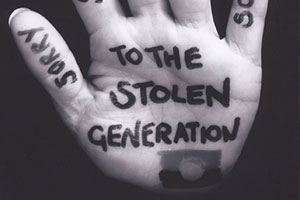 To celebrate the 60th Anniversary of the Universal Declaration of Human Rights, the Australian Human Rights Commission held a photo competition based on the theme - 'Dignity and justice for all of us'.

The theme reinforced the vision of the Declaration as a commitment to universal dignity and justice, and reinforces how human rights are an inextricable part of our lives - for everyone, everywhere, everyday.

The shortlisted images in this exhibition reflect the theme of the competition and provide a unique approach to a human rights subject. For some, the photograph recorded a moment that celebrates dignity and justice; for others, it captured fundamental rights and freedoms being recognised; and for others it was an observance of what human rights meant to them. 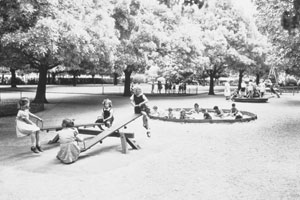 Children at playThe places provided for children reflect society's attitudes towards them. Reform, Fitness and Fun is an exhibition exploring the intersection of child development and play theories with the design of public playgrounds in South Australia.

It draws on historical resources and sites from across the state and overseas, and on the expertise of a multi-disciplinary team of child development and play specialists, historians, architects, and landscape architects. Curated through the UniSA Architecture Museum.

Project Abraham: A Conversation Between Muslims, Christians and Jews
27 April - 28 May 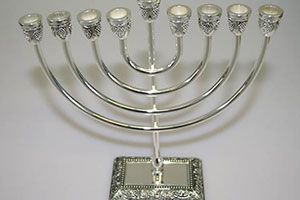 Project Abraham brings together the three faiths of Islam, Judaism and Christianity to highlight commonalities and build interfaith understanding and has involved education programs across Australia.

This exhibition, curated for Project Abraham, features photographs of synagogues, mosques, and churches, calligraphy writings of sacred prayers, and religious artefacts. Items on display include: holy oil, perfume bottles and spice boxes, religious head coverings and clothing, Muslim prayer beads and rosary beads, and copies of the Jewish Bible, the Christian Bible and the Holy Qu'ran. 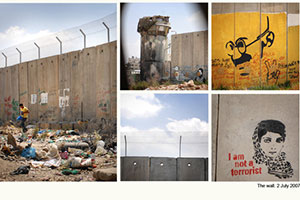 A series of 24 photo essays completed during Wend Lear's placement as a photographer and photography teacher in Palestine during 2007. Each week Wend produced a series of five photographs documenting events and encounters. Each is a small narrative relating to the human condition and life in Palestine itself.

These essays document the everyday events and occurrences of a displaced people in an occupied land and examines the nature of how documentary as a visual record on an ongoing basis gives a different basis for understanding, showing the reality of the situation through the 'ordinary' rather than sensational highlights. 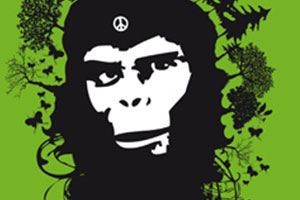 In recognition of the strong role visual communication has played in Greenpeace actions, the Greenpeace Design Awards have been established.

The aim is to motivate the global creative community to develop visually striking artwork that encourages the public to support Greenpeace and take action on critical environmental issues.

The Greenpeace Design Awards are hosted by Greenpeace Australia Pacific and UniLife Inc, in association with the University of South Australia. The exhibition is a display of the shortlisted entries and forms part of a multi-state travelling program. 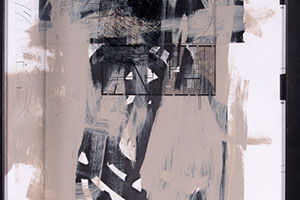 Traces explores connections and intersections between the work of artists, architects and designers engaging with the key themes of Drawing / Sustainability / Environment.

FIRST of the Friends
8 September - 2 October 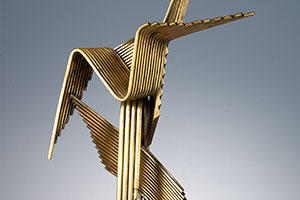 The "First of the Friends" Show features the work of artists, students, former teachers and lecturers, and current staff, who are members of Friends of the SA School of Art (UniSA) - in response to a call to exhibit using any media.

The Friends of SASA come from a variety of backgrounds and have been trained in diverse artforms - they are artists, designers and crafts-people and their talent is a rich resource. The Friends say: "By using this beautiful gallery, we would like to show the valuable contribution members make to our contemporary society and culture in Adelaide and the State."

A celebration of the role of editors in assuring quality in all forms of communication.

Readers of novels, poems, government reports, engineering tenders, educational texts, magazines, websites or marketing brochures are generally unaware of how much the words, layout and structure of the work have been changed from the original author's first attempts. By contrast, careful readers and critics are usually well aware when works they read have not been first scrutinised by the rigorous editor's eye.

Held in conjunction with the Fourth IPEd National Editors Conference (8-10 October at the Adelaide Festival Centre), the exhibition will demonstrate the many and varied roles played by editors within individual published works, and across a broad spectrum of forms of communication. 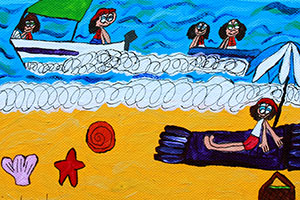 The exhibition is a showcase of work produced in the Tutti Visual Arts Program by young adults with intellectual disabilities. The styles, themes and techniques are varied and reflect each artist's concerns and interests. Much of the work is delightful and amusing and revels in pattern and colour. Other works hint at the deeper, darker side of life and its struggles.

The work is unified by its vibrancy and authenticity. The Tutti Visual Arts Program operates over three days each week and offers the artists the opportunity to practice seriously and participate in the mainstream arts world.

This exhibition explores the notions of table: to lay for discussion; tabula rasa: to scrape away and erase; and place-setting as premises to reconfigure and reinterpret the table from the 2007 Interior Architecture Kerry Packer Civic Gallery exhibition 'a place at the table'. The table has become the metaphorical setting for narratives and artefacts to describe the 'places' people have made [set] in South Australia. These may be cultural, social, political, commercial, spatial or landscape settings. Explorations of the themes such as "under the table; table talk; table of contents; round table" are used as prompts for the production of provocative artefacts, text and images. Curated by staff of the UniSA School of Art Architecture and Design.