Join us for this in-conversation and book launch of The Twentieth Man, the debut political thriller from one of Australia's most respected journalists, Tony Jones.

He was the only one left alive; now it was his turn to die.

In September 1972 journalist Anna Rosen takes an early morning phone call from her boss at the ABC telling her about two bombings in Sydney's busy CBD. It's the worst terrorist attack in the country's history and Anna has no doubt which group is responsible for the carnage. She has been investigating the role of alleged war criminals in the globally active Ustasha movement.

High in the Austrian Alps, guided by starlight and a crescent moon, Marin Katich is one of twenty would-be revolutionaries who slip stealthily over the border into Yugoslavia on a mission planned and funded in Australia which will have devastating consequences for all involved. Two-and-half years ago Anna and Marin had become lovers at university but his sudden and mysterious disappearance brought their relationship to an abrupt end. Now the Sydney bombings will draw their lives back together.

With Croatian extremists under suspicion and a power struggle erupting between ASIO and the federal police, Attorney-General Lionel Murphy personally directs a raid on the security agency. Events suddenly reach a trigger point with the impending arrival of Yugoslavia's prime minister.

Tony Jones has written a brilliantly compelling thriller, taking us from the savage mountains of Yugoslavia to Canberra's brutal yet covert power struggles in a novel that's intelligent, informed and utterly suspenseful. 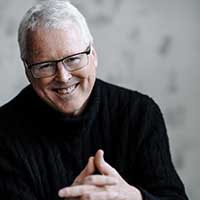 Tony Jones was still at school when Lionel Murphy raided ASIO. After an ABC cadetship, he joined the television program Four Corners as a reporter in 1985, and then went to Dateline at SBS in 1986. He subsequently was an ABC foreign correspondent, for a time in London and later in Washington. Inter alia, he covered the war crimes in Bosnia. For many years he presented the ABC TV current affairs program Lateline. Today he hosts Q&A on ABC TV on Monday nights. The Twentieth Man is his first novel. More Information