Ten years after publishing his internationally bestselling The Weather Makers, acclaimed scientist and author Tim Flannery argues that Earth’s climate system is approaching a crisis. Catastrophe is not inevitable, but time is fast running out.

In the lead-up to the United Nations Climate Change Summit to be held in Paris in December, Atmosphere of Hope provides both a snapshot of the trouble we are in and an up-to-the-minute analysis of some of the new possibilities for mitigating climate change that are emerging now.

From atmospheric carbon capture through extensive seaweed farming, CO2 snow production in Antarctica and the manufacture of carbon-rich biochar to reflecting the sun’s rays by releasing sulphur into the atmosphere and painting landscapes and cities white, Flannery outlines an array of innovative technologies that give cause for hope.

Book sales will be open from 12.00pm and Tim will be available to sign books after the lecture. 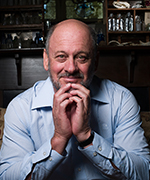 Professor Tim Flannery is one of Australia’s leading writers on climate change. An internationally acclaimed scientist, explorer and conservationist.

Tim Flannery has published over thirty books including the award-winning The Future Eaters, The Weather Makers and Here on Earth and the novel The Mystery of the Venus Island Fetish.