A Bama Bagaarrmugu of the Guuguwarra Nation from Kalpowar and Jeanie River area, Cape York 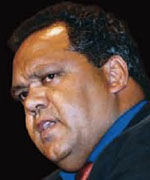 Noel Pearson is Founder and Director of Strategy of the Cape York Partnership and one of Australia’s leading thinkers. He comes from the Guugu Yimidhirr community of Hope Vale on south eastern Cape York Peninsula, and is the primary architect of the Cape York Agenda.

Noel is a history and law graduate from the University of Sydney. In 1990, Noel co-founded the Cape York Land Council. Three years later, following the Mabo decision of the High Court of Australia, he played a key part in negotiating the Native Title Act 1993 with the Federal Government.

Noel’s goal is to enable Cape York’s Indigenous people to have the capacity to choose the life they have reason to value by reinstating the rights of Aboriginal people to take responsibility for their lives. Noel is a sought-after speaker, influences public policy debate and Government deliberations, and has dedicated his life to the cause of Indigenous empowerment.