The Society behind the Royal Show

The Royal Adelaide Show is South Australia’s largest community event. Staged by the Royal Agricultural & Horticultural Society of SA Inc. (RA&HSSA) and beloved by the community, it has been part of our State’s life for 175 years.

However, it is not just about the Royal Show, indeed the Society has played an important role in initiatives such as the Adelaide Botanic Garden, Roseworthy College, and the South Australian wine industry. Few would understand that the RA&HSSA has advanced the cause of rural industries beyond any other organisation.

In this lecture, Rob Linn will provide some tantalising insights into the story of the RA&HSSA and the Royal Adelaide Show, and reveal some of the Society’s extraordinary archive.

Co-presented with the Royal Agricultural & Horticultural Society of SA 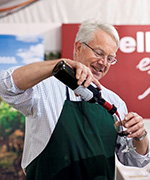 Rob Linn established Historical Consultants Pty Ltd in 1985. Since then over 40 books have been written, many articles published and major reports brought together for academia, government and the private sector.

The firm has been awarded major literary and publishing awards, among them the inaugural Lysbeth Cohen Award for biography and the ASA Mander Jones Award.

Rob is also an interviewer for the National Library of Australia's oral history program.

He believes that history should be active, engaging and entertaining.