Making Connections in a Digital World

We are in the midst of a new era, the so-called Fourth Industrial Revolution, characterised by myriad new networks and connections. The latest technologies are fusing the physical, digital and biological worlds, impacting all sectors, economies and industries, and even challenging ideas about what it means to be human. In this new world, digital is also breaking down the traditional boundaries between arts and sciences. New, hybrid disciplines made up of a range of fields previously rarely combined are replacing established areas of learning and conventional workplace roles. Interdisciplinary overlaps are becoming the norm, not the exception. And this is not diluting or degrading areas of study or the world of work, but rather creating infinite variety, richness and possibility.

Digital technology is transforming all aspects of the way we live, work and play. Advances in artificial intelligence, the use of big data, ultra-fast processers, and the power of the internet are opening up a host of possibilities never before dreamed of. Yet, these same developments are leading to unintended consequences which our society is increasingly ill-equipped to address – issues such as fake news, cybercrime, and the erosion of trust in the democratic process. So rapid is the speed of change that society is being left behind. And so are governments, regulations and economic models.

Technology itself is neutral, neither good nor bad. It is the way it is designed, developed and deployed that is creating the extremes that are starting to dominate our world. How far are these challenges the growing pains of innovation and how far are they the consequence of unfettered commercialism? How do decision-makers, law-makers and civic leaders keep one step ahead of technological progress? And is that progress now so fast that it’s out of control? How does society as a whole adapt to this constant change, and develop the resilience and mind-set necessary to thrive, not simply survive? Will robots take all our jobs, leaving us deskilled and redundant? And how do we ensure our world remains diverse, inclusive and reflective of all, not just of the few?

Pushing the boundaries and developing ever more powerful technology is creating a vacuum of responsibility and ethics. Building bigger, better and faster because we can is not the same as building bigger, better and faster because we should. We have a collective responsibility – whether as academics, policy-makers, activists, or citizens – to ensure that we use technology for good. Technology has the power to solve some of the world’s greatest problems. But it can also make them worse. The ethics of this brave new world are uncharted territory, and we urgently need a roadmap to ensure we harness the full potential of the new networks and connections technology offers to create a better future. 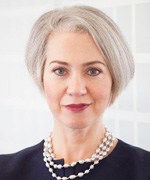 Rachel is a renowned digital leader based in the UK. Passionate about harnessing technology for positive social outcomes, she has held CEO positions in the not-for-profit sector, and was Head of Profession for Digital at the UK Department of Health. She has a strong track record of leading successful multidisciplinary programmes to deliver digital transformation, improve digital inclusion and skills, and ensure technology works for everyone in society.

Rachel holds a number of non-executive roles. From 2013–16, she was Chair of the Digital Leaders network, and is now a non-executive member of the Digital Leaders, DigitalHealth.London and UKCloud Health Advisory Boards. In February 2018 she was appointed to the Board of the Campaign for Social Science. A strong advocate of the importance of diversity and gender equality, she mentors and supports girls and women interested in a career in technology.

Rachel has extensive senior leadership experience in the public, private and not-for- profit sectors in the UK and internationally. She speaks regularly at conferences, is a frequent judge of digital awards, and a Fellow of the Royal Society of Arts (RSA). Rachel has featured in Computer Weekly’s list of Most Influential Women in IT in 2016, 2017 and 2018.