Join us for the book launch of Colombiano written by Australian born author and journalist Rusty Young. Blending fact and fiction, Colombiano takes us on a heart-thumping journey into the violent and unpredictable world of post-Escobar Colombia.

During this time he was both shocked and touched by the stories of child soldiers he encountered. He vowed to one day turn their challenging life stories into a book and let their voices be heard.

Colombiano is an epic tale of rural villages held to ransom, of jungle drug labs, cocaine supermarkets, witch doctors and buried millions, of innocent teenage love, barbaric torture and meticulously planned revenge. Superbly told and by turns gripping, poignant and darkly comic, Colombiano is the remarkable story of a boy whose moral descent becomes a metaphor for the corruption of an entire nation.

Both blockbuster thriller and electrifying coming-of-age story, Rusty Young’s powerful novel is also a meditation on the redeeming power of love. 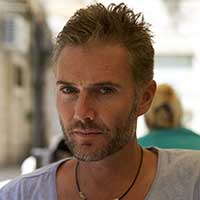 Rusty Young is the author of the international bestseller Marching Powder, the true story of an English drug smuggler in Bolivia’s notorious San Pedro Prison.

He grew up in Sydney, and studied Finance and Law at the University of New South Wales. However, following the global success of Marching Powder
he settled in Bogotá, Colombia for seven years.

Since 2011, Rusty’s house in Bogotá has been the headquarters for a local charity that supports former child soldiers exiting the civil war, teaching them valuable life skills.

Colombiano is his first novel.