In October, the United Nations General Assembly will decide whether or not Australia is elected to the UN Human Rights Council. The coming vote has prompted greater scrutiny of Australia’s human rights record, with much of the international attention being on the government’s treatment of people seeking asylum. This comes at a time when nations in Africa, the Middle East, Europe and Asia are responding to the greatest crisis in forced displacement since World War II. In his lecture, Paul Power will examine: 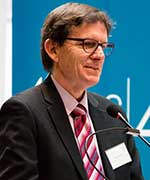 Paul Power has been Chief Executive Officer of the Refugee Council of Australia, the national peak body on refugee policy, since 2006. Paul is a member of the Steering Committee of Asia Pacific Refugee Rights Network, which brings together non-government organisations in 28 countries to work together on refugee issues. He participates actively in global fora on refugee protection and resettlement, having served as co-chair of the global Annual Tripartite Consultations on Resettlement and as a member of the Australian Government’s Refugee Resettlement Advisory Council. Prior to his current role, Paul worked in the NGO sector as a media officer, researcher and manager and in the newspaper industry as a journalist and editor.