Nusrat Durrani: Love in a Time of Hate

Against the global backdrop of racial strife, violence and oppression, pioneering media executive Nusrat Durrani's work stands out boldly. As the founder of MTV World he used the power of an iconic brand to provide a platform for unheard voices and create inspiring and authentic narratives of international youth.

In a cutting-edge range of work that intersects culture, politics, relationships, fashion and film, Nusrat Durrani’s stories have covered over 50 countries from Iran, Turkey, Australia and Afghanistan to Venezuela, Myanmar and Native America, always putting the humanity of their subjects at the centre. He has been felicitated by President Obama and received numerous awards and his work applauded for its fearlessness, sensuality and impact.

In this special event Nusrat Durrani takes you on a scintillating pop culture trip around the world and makes an urgent and passionate case for creating bridges of love and empathy in a world torn apart by distrust and fear.

For the first time, the Hawke Centre is proud to be presenting at the Ubud Writers & Readers Festival - championing literary and artistic talent at one of the 'Best Literary Festivals Around the World'.

With a line-up of over 150 artists, thinkers and performers thousands of creative minds will converge at the Festival to connect, learn and be inspired. 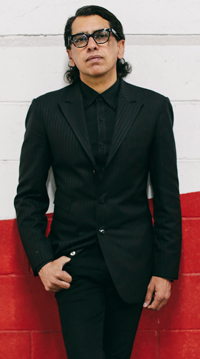 Nusrat Durrani is a pioneering media executive, producer and award-winning creative with a portfolio of transformative, multi-platform content and branded entertainment for both commercial and social impact.  He is renowned for his distinctive, cutting-edge creative sensibility, a flair for identifying next generation talent, and the ability to monetize pop culture trends and emerging audiences in television, digital and social media as a respected ‘intrapreneur’ at Viacom.  Nusrat infuses American culture with global influences across film, music and fashion by creating platforms for unheard voices and telling untold stories from around the world.  He is a frequent social innovation honoree for his work advancing culture, a prolific public speaker and panelist, and the recipient of significant press recognition in the media.  He has been honored by President Obama for his work spotlighting young Native American artists and has collaborated with the White House on films about indigenous youth.  Most recently, Nusrat founded and served as General Manager & Sr. Vice President at MTV World, Viacom Media Networks’ visionary global content incubator and innovation engine, and created and executive produced the acclaimed Rebel Music documentary series about young change agents fighting the status quo in turbulent countries.

His recent work Madly, an omnibus film about love which he both conceived and executive produced featuring works by top-notch international talent, was selected to open the 2016 Tribeca Film Festival and won Best Actress in its category.  Nusrat has also created award-winning branded entertainment and music programs for blue chip companies including GM, Smirnoff, AT&T and Intel, and collaborated with a diverse range of artists and musicians including singers Joan Baez and Laura Jane Grace, and artist/activist Shepard Fairey. Prior to creating MTV World, Nusrat held a number of executive positions at MTV Networks, and was an integral member of the team that executed MTV’s entry into the digital realm and launched MTV.COM. Nusrat’s current passion projects include developing a line of furniture inspired by David Bowie, launching a sustainable fashion brand, and developing two books on travel photography.