Does the European Union have a Future?

Europe has undergone various challenges in recent years – from the declined of the Euro to the refugee crisis to Brexit.  What has gone wrong with the European project, a revolutionary political experiment that was meant to deliver (and in fact did deliver for many years) peace, democracy, open borders and constantly rising living standards through the gradual sharing of sovereignty?  What are the main challenges facing Europe and the European project and what if anything can be done to relaunch the project? What would be the consequences of failure for Europe and beyond in times when globalisation and the liberal global economic order can no longer be taken for granted? 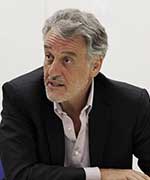 Professor Loukas Tsoukalis was born in Athens, Greece. He studied economics and international relations at the University of Manchester, the College of Europe in Bruges, and the University of Oxford where he obtained his doctoral degree. He taught for many years at Oxford University and later became Professor at the European Institute of the London School of Economics and Political Science. He returned to Greece as Professor of European Integration at the University of Athens and has been for many years President of the Hellenic Foundation for European and Foreign Policy (ELIAMEP), which is Greece’s main think tank. He has also taught in other leading universities in Europe and the United States. In 2016, he was Visiting Professor at the Kennedy School at Harvard University.

He has advised the former President of the European Commission and the former President of the European Council. He is the author of many books, including some of the bestsellers in the field, which have been translated into several languages. His latest book In Defence of Europe: Can the European Project Be Saved? was published by Oxford University Press in 2016. He has received academic distinctions and awards, including the Légion d’honneur of the French Republic for his contribution to European integration.