'When my son turned fourteen, we set out to explore the ghost empire of Constantinople. It was to be a coming of age adventure, of sorts. My ambition was that Joe and I would walk the entire length of the fabled Land Walls of Constantinople, from the sea of Marmara all the way to the Golden Horn: this was where the Roman Empire died in agony, in the most bizarre and dramatic siege in medieval history. Once you know the story of the Byzantine Empire, you can't help but feel its ghost pressing against you. You feel it in the crumbling walls. You become suffused with it as you stand under the golden dome of the Hagia Sophia. You hear its echoes in the shadows of the cavernous underground cistern of Justinian. The story of how Constantinople flourished into greatness and then expired in terrible violence is one of the strangest and most moving stories I know. I wanted my son to have that story too.'

GHOST EMPIRE is a rare treasure of a book - an utterly captivating blend of the historical and the contemporary, realised by a master storyteller.

In 2014, Richard Fidler and his son made a journey to Istanbul. Fired by Richard's passion for the rich history of the dazzling Byzantine Empire - centred around the legendary Constantinople - we are swept into some of the most extraordinary tales in history. The clash of civilizations, the fall of empires, the rise of Christianity, revenge, lust, murder. Turbulent stories from the past are brought vividly to life at the same time as a father navigates the unfolding changes in his relationship with his son.

This is one of those books. A book that inspires and broadens your understanding of the world, while at the same time reflects your own experiences. A book that stays with you long after you've finished the last page. A book not to be missed. 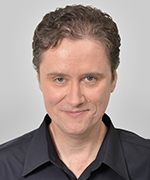 Richard Fidler presents CONVERSATIONS WITH RICHARD FIDLER, an in-depth, up close and personal interview program broadcast across Australia on ABC Radio.  He's interviewed prime ministers, astronauts, writers and scientists, but the program often features remarkable people who are unknown to the wider world.  The program attracts a large listening audience around the nation, and is the most popular ABC podcast in Australia, with over 16 million downloaded programs last year.

Richard has also presented several television series over the years, including the acclaimed RACE AROUND THE WORLD, and he was the creator of AFTERSHOCK, a documentary series on disruptive new technologies.

In another life Richard was a member of Australian comedy trio The Doug Anthony Allstars (DAAS), which played to audiences all over the world.