First there was Girt.

In this side-splitting sequel, David Hunt takes us to the Australian frontier, home to hardy pioneers, gun-slinging bushrangers, directionally challenged explorers, and lots and lots of sheep.

In True Girt, David Hunt introduces Thomas Davey, the heavy-drinking Tasmanian governor credited with the creation of the Blow My Skull cocktail. He retells the story of Burke and Wills, who ventured forth on their grand expedition carrying an oak table, stationery cabinet, bathtub and Chinese gong. And of Harry, the first camel used in Australian exploration, who shot dead his owner, the explorer John Horrocks.

This is Australia’s past as you have never seen it– funnier and wilder, sadder and weirder, than you could possibly imagine. Think Ned Kelly …in Speedos.

Don't miss out on this highly entertaining evening and book launch with the very funny and much acclaimed David Hunt. 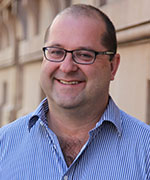 David Hunt is a writer, satirist and historian. He authored The Nose Pixies and Girt: The Unauthorised History of Australia, which won the 2014 Australian Independent Booksellers (Indie) Award for Best Non-Fiction Book and was shortlisted for several other literary awards.  He has also written for The Sydney Morning Herald, The Age, The Guardian, The Chaser Quarterly and The Hoopla. He co-presents the Australian history podcast Rum, Rebels & Ratbags with Dom Knight for ABC Radio and has appeared regularly on ABC Radio shows, including Outsiders, Background Briefing, Counterpoint, The Drawing Room and Evenings with Dom Knight.

He is a regular panelist and participant at writers festivals and other arts and community functions.