Cancer has traditionally been treated by surgery, radiation therapy and cytotoxic drugs.  However, since the 19th century there has been an interest in using the body’s defences against infection to fight cancer. The Australian Nobel Prize laureate, Sir McFarlane Burnett, predicted in the 1950s that immunotherapy would be successful, but it has only been in the last 5 years that the means to fight cancer by enhancing the body’s defences has become a reality.  New drugs, called checkpoint blockade inhibitors, have proven beneficial for some patients with otherwise untreatable cancers. While it’s too early to talk of a cure, these drugs have eradicated all signs of cancer, for up to two years. The data to date suggest that immunotherapy will become a routine part of the management of at least some cancers, and, unlike other therapies, will have the potential to cure cancers that have spread to distant sites of the body. 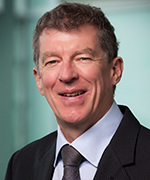 Dr Ian Frazer is a clinician scientist, trained as a clinical immunologist in Scotland. As a professor at the University of Queensland, he leads a research group working at TRI in Brisbane, Australia on the immunobiology of epithelial cancers.  He is recognised as co-inventor of the technology enabling the HPV vaccines, currently used worldwide to help prevent cervical cancer. He heads a biotechnology company, Admedus Vaccines, working on new vaccine technologies, and is a board member of several companies and not for profit organisations. He is current president of the Australian Academy of Health and Medical Sciences, and a member of the Commonwealth Science Council.

He was recognised as Australian of the Year in 2006. He was recipient of the Prime Ministers Prize for Science, and of the Balzan Prize, in 2008, and was elected Fellow of the Royal Society of London in 2012.

He was appointed Companion of the Order of Australia in the Queen’s Birthday Honours list in 2013.