The mysterious disappearance of Michael Rockefeller in New Guinea in 1961 has kept the world, and even Michael’s powerful, influential family, guessing for years.

Author Carl Hoffman, through photographs and video, combined with his own tales, will tell the story of Michael Rockefeller's disappearance and the two very different journeys he made to Indonesian Papua to figure out what happened to Rockefeller and why.

It's part detective story, part history and part adventure into one of the remotest places on earth that ultimately speaks to the importance of immersing yourself as deeply as possible in a story.

Hoffman is the acclaimed author of Savage Harvest, which debuted on the New York Times bestseller list and was named by Amazon as the best non-fiction book for 2014. 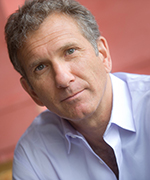 Carl Hoffman is a critically acclaimed author, with works including Savage Harvest: A Tale of cannibals, Colonialism and Michael Rockefeller's Tragic Quest for Primitive Art, The Lunatic Express: Discovering the World Via Its Most Dangerous Buses, Boats, Trains and Planes, and Hunting Warbirds: The Obsessive Quest for the Lost Airplanes of World War II. Hoffman has been a contributing editor of National Geographic Traveler, and has travelled to more than 75 countries on assignment in various editorial roles.

Co-presented by The Bob Hawke Prime Ministerial Centre, UniSA and Adelaide Writers' Week, as part of the 2015 Adelaide Festival of Arts