This event is fully booked.  Please email the Hawke Centre if you would like to be placed on a waiting list.

Sir Murray Rivers QC (retired) is one of Australia's most controversial legal and political figures. He is a former Victorian Supreme Court Judge and an outspoken media commentator, often described unkindly, and he believes unfairly, as ‘The Graham Richardson of the Liberal Party’.

His Honour’s forthright speech:  ‘A conversation with the Australian peasants…pissants…people’ is part of an urgent dialogue which the Abbott Government insists the voters need to undertake about the future of the colony.

Sir Murray’s address is a hilariously clever, insightful, talk; political humour and wit which is so politically incorrect it will annoy or satisfy in equal measure. No-one of either political persuasion escapes unscathed. This is political satire that only Bryan Dawe can deliver. 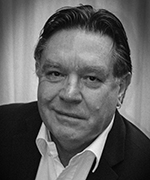 Born in Port Adelaide, Bryan Dawe  is one of Australia’s finest political satirists. He has enjoyed a long career on radio, television, and film. He is best known for his work on ABC-TV with fellow satirist, John Clarke, and for his role with John Clarke and Gina Riley, in the much acclaimed ABC Television series ‘The Games’.

He is a long-term advocate of reconciliation between white and black Australians. He is also an inveterate traveller and photographer, with work showcased in the ‘Syria Lost’ exhibition, depicting Syria a month before the civil war erupted.