Ethical Globalization:
A Vision of a World Where Benefits Accrue to All

Today's globalization is one of stark contrasts. There are more connections - markets, people and ideas linked as never before. At the same time, there are more divisions - between North and South, between rich and poor, between the powerful and powerless.  These divides can be seen in statistics. At a time of unparalleled prosperity for some, 54 countries are poorer now than they were a decade ago.  In 14 countries, more children are dying before their fifth birthday. In 21 countries, more people are going hungry. In 34 countries, life expectancy has fallen.

Worldwide, the number of people living in chronic poverty and daily insecurity has not changed for more than ten years, with women and children suffering disproportionately.

No one will deny any longer that turmoil in one region can spread rapidly to others, through terrorism, armed conflict, environmental degradation or disease as demonstrated by the rapid spread of AIDS around the globe in a single generation.  While the connections are evident, we seem further apart in finding ways to tackle global problems in a coordinated way where the burdens and responsibilities are shared.  In the face of these challenges, a vision for an ethical approach to globalization is critically needed.

What is "Ethical Globalization"?

Ethical globalization requires greater recognition of the responsibility of the international community to help people who have been denied their fundamental rights. This requires taking human rights beyond their more traditional political and legal realms and applying them to other fields.

The notion of Ethical Globalization is especially poignant when we look at Africa, my home continent. Despite increased attention of the world to the plight of Africa by celebrities and the leading politicians in the world, Africa continues to lag far behind the rest of the world in basic indicators of health, prosperity, education, and opportunity. A woman born in Zambia today has an average life expectancy of 40 years, while a woman born in Australia will likely live twice as long - until she is 83. The lifetime odd of dying during childbirth are 1 in 18 for a woman in Nigeria, compared to 1 in over 6000 for a woman in the USA. Sub Saharan Africa, only 17 percent of girls enrol in secondary school. Yet - there is promise, and there is reason to be hopeful. In Africa, as in many parts of the world, grassroots organizations, such as my former organization, the World YWCA, are working to address these basic inequities. Even more hopeful, in this time of divisions between the developed and the developing world, and between the East and the West, countries are joining together to forge alliances and coalitions to address the developing world's - and Africa's - challenges.

The lecture will be a call to action for "Ethical Globalization: A Vision of a World Where Benefits Accrue to All" 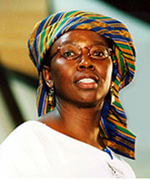 Dr Musimbi Kanyoro is the Director of the Population Program at the David and Lucile Packard Foundation. The Population Program is dedicated to reproductive health and to the integration of those services with critical global health issues like HIV/AIDS as well as other education and development issues.

From 1998-2007, Dr Kanyoro served as General Secretary of the World YWCA, an umbrella organization whose members are national YWCAs in 125 countries with an outreach to 25 million women and girls and their families in 3000 communities. As General Secretary, Dr Kanyoro was responsible for the oversight of the largest women's membership organization in the world working closely with global leaders from other non-governmental organizations, governments, the World Bank, United Nations agencies, businesses and faith-based institutions. Her role included public speaking, participation in high level delegations, political negotiations, strategic thinking forums on global issues, convening events for members and partners, and management of staff and assets of the organization. During her tenure, Dr Kanyoro led the organization to prioritize Women's reproductive health with special focus on HIV and AIDS, and on young women and girls.

Prior to her tenure at the YWCA, Dr Kanyoro worked with the Lutheran World Federation, the social arm of 66 million Lutherans aimed at providing humanitarian, development, and advocacy services to communities around the world. Dr Kanyoro oversaw various sub programs including Participation in Decision Making, Education, Development, Empowerment, Human Rights of Women and Women's Faith and Theology.

Dr Kanyoro currently provides volunteer leadership for a number of non-government organizations. She is the President of the World Association for Christian Communication and a member of the Board of Directors of the African Population and Health Research Centre (APHRC), Realizing Rights: the Ethical Globalization Initiative, the Global Coalition on Women and AIDS [UNAIDS], and the Legacy Foundation.

Dr Kanyoro has received numerous awards internationally and is a recognized public speaker, writer and trainer; she has authored more than 100 published articles and edited or written 11 books.