Geraldine Cox is often described as an Aussie living legend. This fierce and determined woman gave up a life of excess and luxury to live in Cambodia and look after some of the poorest people on the planet. An incredible storyteller, Geraldine will make you laugh, cry and think.

In a country where traditional meanings of wealth have come to stand for corruption and inequality, the only wealth worth having is wealth of an entirely different kind. On the ground in Cambodia, this different kind of wealth can only come from putting the means to develop and advance into the hands of the individuals and communities of the nation. Ideas and practices around charity, philanthropy and our involvement in developing nations have come a long way since the 1990’s.

This is one woman’s story from the spear-head of this change. After 22 years as President and Founder of Sunrise Cambodia, Geraldine knows that community development with a focus on education and health is the only way to truly enable some of the poorest people in the world to create this tangible, lasting, wealth of a different kind. 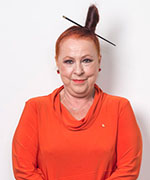 Geraldine Cox started her career with the Australian Department of Foreign Affairs in 1970 at the age of 25. Her first posting was to the Embassy in Phnom Penh. Assignments followed in the Philippines, Thailand, Iran and the United States before Geraldine returned to live in Sydney to work for the Chase Manhattan Bank. In 1995 Geraldine found herself unemployed and decided to return to Cambodia, where she worked for Prince Norodom Ranariddh and helped look after orphans on weekends. In July 1997 a coup was launched in Cambodia. While most westerners fled Geraldine couldn’t abandon the children.  She has since worked tirelessly to help protect and raise the children of Sunrise Cambodia where she is affectionately known as 'Big Mum'. Geraldine was made a member of the Order of Australia in 2001 for her work with children in Cambodia and was subsequently chosen for the Weary Dunlop Award.