Is it Necessary to Love Your Neighbours?
Living with Radical Diversities and the Right to be Oneself

Both in academic circles and in the global middle class culture, international relations is a play of national interest, security, international trade and other such lofty, tangible forces with which the first pages of serious newspapers and university departments seem permanently concerned. Yet, even ordinary citizens seem aware that underlying these clearly identifiable, real-life forces there are less tangible subjectivities in the form of crosscutting perceptions, sentiments, images and fantasies that constitute the underside of international relations. This lecture deals with this underside; it emphasizes the web of subjectivities in which relationship among countries, communities and what some would call nations take shape.

A crucial part of these subjectivities, this lecture will argue, is the as yet tacit, ill-defined right to be oneself and that right includes the right to disapprove and dislike, though not the right to hate or nurture fantasies of annihilation or extermination. It is a part of the argument of this lecture that the spread of Enlightenment values is making it increasingly obligatory to disown all hostility towards or even dislike of any artefact, tradition or practice that is culturally marked - from cuisine to sports, from marriage rituals to religious rites, and from dress to ideas of personal hygiene. Unless, of course target of rejection or dislike happen to be associated with a rich and powerful country located in West Europe or North America. You can fulminate against Cola drinks but not convey your dislike for Sri Lankan or Chettiar food, which routinely brings steam out of your ears. It is still probably possible to make wry comments about English food in polite society, particularly if you are English, but it is increasingly becoming difficult to say anything negative about Bombay films if you are not an Indian. Yet, there are at least as many Indians who passionately dislike Bombay films as there are English who disparage English food. That is the price of multiculturalism.

This lecture argues that it is possible to live with diversities without such a tough version of cross-cultural tolerance and that is the way many societies, particularly the ones that are communities-based, have traditionally lived with radical diversities. The lecture tries to recover and illustrate a few elements of this alternative cosmopolitanism. 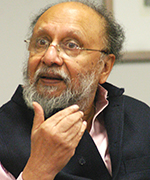 Dr Ashis Nandy at 2010 UniSA Nelson Mandela LectureDr Ashis Nandy has been described as "India's most arresting thinker, and a cultural and political critic without perhaps any equal in South Asia" (Vinay Lal, Associate Professor of History, UCLA, USA) and in 2008, was listed as one of the top 100 public intellectuals in the world by Foreign Policy magazine.

These accolades reflect Dr Nandy's prowess as a longstanding spokesperson for peace and cultural survival across international boundaries. A highly respected political psychologist and sociologist, his attention has been directed for more than thirty five years to two diametrically opposite domains - social existence, human potentialities and creativity - and human destructiveness, particularly mass violence. It is the oscillation between these two domains that has defined his life and work. This enduring devotion to understanding these divergent aspects of human existence has brought him close to social movements, including people in non-political roles at the community level who grapple with issues of peace, human rights, environment, and cultural survival. Over this time he has also served on a number of commissions, hearings and investigations into communal riots, violence arising from development, racist crimes against women, electoral malpractices and human rights abuses.

Dr Nandy is ideally suited to deliver The 2010 UniSA Nelson Mandela Lecture. The thematic purpose of this lecture is to promote the fundamental rights and freedoms of individuals and the value of truth and reconciliation in life and public affairs. Through his extensive writing and active involvement, Professor Nandy has examined a wide range of human conflicts, and has offered insights about achieving co-operative human existence and reconciliation within and across national world boundaries.

Dr Nandy is a former Director and now Senior Honorary Fellow of the Centre for the Study of Developing Societies and Chairperson of the Committee for Cultural Choices and Global Futures in Delhi, India. He has co-authored a number of human rights reports and is active in movements relevant to his field of endeavour. To name but a few of his expert appointments he is a member of the Executive Councils of the World Future Studies Federation, the Commonwealth Human Rights Initiative, The International Network for Cultural Alternatives to Development, and of the People's Union for Civil Liberties. Nandy's powerful intellect has been recognised through numerous academic appointments including as Woodrow Wilson Fellow at the Wilson Centre, Washington, D.C., and as Charles Wallace Fellow at the University of Hull, Fellow of the Institute for Advanced Studies in Humanities, University of Edinburgh, and resident at the Center for South Asia Studies (CSAS) at the University of California, Berkeley. He held the first UNESCO Chair at the Centre for European Studies, University of Trier and in 2006 became the National Fellow of the Indian Council of Social Science