A new Australian consensus for the 21st Century 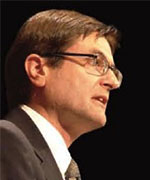 Greg Combet became Secretary of the Australian Council of Trade Unions (ACTU) in February 2000 and is a Director of Australian Super and Members Equity Bank.

Born in 1958, Greg has tertiary qualifications in engineering, economics and labour relations and the law. He worked as a miner and in minerals exploration before being employed by the NSW Tenants' Union as a project officer and then by the Lidcombe Workers' Health Centre.

Greg started work with the Waterside Workers' Federation in 1987, one of the unions that merged to form the Maritime Union of Australia. He became a Senior Industrial Officer at the ACTU in 1993 and was elected ACTU Assistant Secretary in 1996.

During this time, Greg worked with unions representing employees in a wide variety of industries, and has overseen the ACTU's Living Wage Case for low paid workers since 1997.

Greg became Secretary of the ACTU in February 2000, following the resignation of Bill Kelty.

Greg has coordinated numerous union campaigns, including the high profile 1998 waterfront dispute and the effort to rescue the jobs and entitlements of Ansett workers.  In 2004 he led the campaign and negotiations with James Hardie to secure funding for compensation for asbestos victims.

In 2006 Greg became a member of the Order of Australia Honours in recognition of his work in industrial relations and on behalf of asbestos victims.

Greg is currently leading the “Your Rights at Work” Campaign against the recent industrial relations legislation changes.