A sustainable planet - a future for Australia 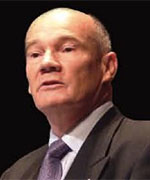 Greg Bourne studied chemistry at the University of Western Australia under a scholarship from BP Refinery, Kwinana. After graduating with honours in 1971, he carried out research into refinery processes for two years at BP's Research Centre in Sunbury in England before joining BP Exploration as a Drilling Engineer in Abu Dhabi. His Exploration activities saw him living and working in the United Kingdom, America, Canada, Ireland, Brazil, China and Australia.

Seconded to the Prime Minister's Policy Unit at 10 Downing Street in 1988, he was the Special Adviser on Energy and Transport, and returned to BP in January 1990 to take up the position of Chief Executive, BP Marine, London.

He returned to Australia in October 1992 as President and General Manager - Exploration and Gas, BP Developments Australia Ltd., with responsibility for BP Exploration's activities in Australia and Papua New Guinea. After working overseas as Director BP Scotland and then Regional Director - Latin America, based in Caracas; he returned to Australia in January 1999 to become Regional President - BP Australasia the position from which he retired from BP in September 2003. Greg took up his current position as CEO WWF-Australia in October 2004.

Greg is also Chair of the Sustainable Energy Authority of Victoria and a Member of the CSIRO Sector Advisory Council to the Natural Resource Management and Environment Sector. He was awarded the Centenary Medal for services to the environment.