Dr Elizabeth Blackburn has been named one of the 100 most influential people in the world (Time, 2007). 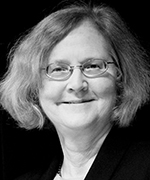 A world-leading scientist and microbiologist, Dr Blackburn is an Australian who has revolutionized understanding of key factors that contribute to ageing and human mortality. Currently based at the University of California San Francisco, she is also the first Australian woman to win a Nobel Prize.

In conversation with the ABC's Robyn Williams, Dr Blackburn will share the passion and insights that have driven her towards her celebrated scientific achievements. Join her on a journey from her childhood in Tasmania to her studies in Melbourne and her career as an internationally-acclaimed microbiologist. Share in Dr Blackburn's reflections on motherhood, women and science as she describes discoveries that are transforming our understanding of human health.

What does the 'Bio-Future' hold? Dr Blackburn and her colleagues began by asking fundamental questions about how nature works, working together to solve scientific puzzles. Their findings opened the door to new understanding about telomeres - the ends of chromosomes - and discovery of telomerase - the replenishing enzyme that influences the human lifespan, challenging conventional thinking about the ageing process.

As Dr Blackburn explains: "Think of telomeres as like the plastic tips that cap your shoelaces to prevent fraying, Telomeres allow cells to divide while holding the important genetic material intact. But now in your mind turn that shiny shoelace tip into wax, like a candle. It's malleable - more like wax than a shiny plastic tip. It slowly burns down with age, getting shorter and shorter. Because every time cells divide, unless something intervenes, telomeres get progressively whittled down until, eventually, the cells die. So this candle length is a 'fuse' that determines the lifespan of cells - the fuse is the telomere and when it gets too short in cells, all hell breaks loose..."

Could these discoveries turn back the human ticking clock and help us to live longer lives? Could they counter the impact of stress on our bodies and prevent diseases such as cancer? Join Dr Blackburn in conversation, and enter the Bio-Future, a journey that must both inspire and inform.

In the presence of the 2013 Annual Hawke Lecturer and Nobel Laureate, Dr Elizabeth Blackburn.

On this occasion Honorary Bragg Membership was conferred on Dr Blackburn by His Excellency the Governor of South Australia Rear Admiral Kevin Scarce AC CSC RANR, on behalf of the Royal Institution of Australia

Hawke Occasional Lecture: New perspectives on the roles of telomeres and telomerase in human diseases and health

Unfortunately no recording was made of this lecture on the request of the speaker as much of the content was new and unpublished.

Additional information and other public lecture recordings may be found on Dr Blackburn's website.

Telomeres are the protective tips that stabilize the ends of chromosomes. The function of telomeres is to allow cells to divide while holding the genetic material intact and preserving normal cell functions. Every time cells divide, unless a process of telomere elongation intervenes, telomeres become shorter and shorter until, eventually, the cells die. Thus a telomere is analogous to a "fuse" whose length determines the lifespan of cells - when the telomere "fuse" in cells becomes too short, either loss of cell replenishment capability, or genomic instability (with the risk of the cell becoming cancerous) can result.

As we age, our telomeres get shorter. Stress or unhealthy lifestyles contribute to insufficient telomere maintenance. Telomere shortness is linked to a wide array of diseases of aging, and is also a mechanism for cellular and organismal aging. These findings have profound implications for the study of human aging and disease.

Can something intervene in this shortening process - can it be slowed or prevented or even reversed? The key lies with telomerase, the enzyme that replenishes telomeres, and protects them. It turns back the hands of the ticking clock. It is in all of the most crucial of our cells, and how much of it there is a key factor in counteracting telomere shortening.