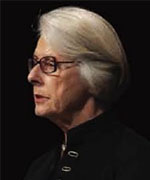 A former Governor General of New Zealand, Dame Silvia is well known for defending human rights through the United Nations, for furthering international justice, and for her deep analysis of the victim experience.

She has described the purpose of international trials as 'to end impunity, promote peace and reconciliation, punish those who have perpetrated proven mass crimes, and achieve justice for victims'.

In this address, Dame Silvia will consider the utility of international criminal trials against the backdrop of the Cambodian experience (1975-9) and others.

The Hon Dame Silvia Cartwright was the first female Chief District Court Judge and the first woman to be appointed to the High Court in New Zealand. She went on to become the Governor-General of New Zealand. She is now one of two international trial judges in the five member Trial Chamber of the ECCC, a court established by the Cambodian government and the United Nations to try senior members of the Khmer Rouge and those most responsible for the crimes that occurred in Cambodia between 1975 and 1989.