Director, Graduate School of Government, The University of Sydney and Former WA Premier

Rarely is there commentary these days without some reference to the disenchantment of the voting public, not just about the way politics is conducted but also about the outcomes from the process, particularly as they relate to long-term challenges.

The Lecture will examine the various interpretations of this disenchantment and the different solutions that have been proposed to address the issue, ranging from constitutional reform to public sector reform to parliamentary reform to electoral reform to party political reform. The question will be posed - is this an issue requiring system change or is it one that goes to the heart of our political culture and the way it has developed in recent years? 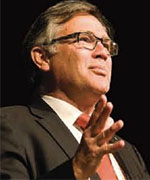 Professor Geoff Gallop was born in 1951 in Geraldton, Western Australia.  He attended local primary and high schools before studying Economics at the University of Western Australia from 1968 to 1971.

After winning a Rhodes Scholarship he attended Oxford University from 1972 to 74 and again from 1977 to 1981, the last two as the Gwilym Gibbon Research Fellow at Nuffield College. He was awarded his Doctorate in 1983.  From 1975 to 1977 he was a postgraduate student at Murdoch University and he returned as a Lecturer in Social and Political Theory from 1981 to 1986.

He was elected the Member for Victoria Park in 1986 and re-elected in 1989, 1993, 1996, 2001 and 2005.  From 1990 to 1993 he was a Minister in the Lawrence Labor Government (holding a range of portfolios most notably Education, Fuel and Energy and Minister Assisting the Treasurer) and when that Government was defeated in 1993 he took up a range of Shadow Ministerial appointments.

In 2001 Dr Gallop was elected as the 31st Premier of Western Australia, a position he held until 2006.  As Leader of the Labor Party he attended the Constitutional Convention in Canberra in 1998 where he put the case for a Republic with a directly elected President.

As Premier Dr Gallop oversaw a range of political and social reforms (electoral reform, gay and lesbian equality and a State Administrative Tribunal), upgraded the State's industrial and labour laws, brought a spirit of reconciliation to the resolution of Native Title and developed partnership models for the State's indigenous communities, changed the law to require all 16 and 17 year olds to be in education or training, was the first Premier to commit his government to a major desalination plant, stopped the logging of all of the State's Old Growth Forests creating record numbers of new national parks, restructured the State's electricity and racing industries, and started construction of the Perth to Mandurah Railway and City Tunnel.

As Minister for Science he established the Science Council, committed significant funding to Research and Development in the State, and established the Premier's Research Fellowship Program to attract leading researchers from overseas and interstate.

Geoff Gallop has been involved in a range of educational, community and sporting associations over many years and from 1983 to 1986 he was a Councillor at the City of Fremantle.  In 2001 he was awarded a Commonwealth of Australia Centenary Medal and was honoured with Life Membership of the Association for the Blind (Western Australia).  In 2003 he was elected a Fellow of the Institute of Public Administration Australia and on the 4th April 2006 he was admitted to the Honorary degree of Doctor of Letters by Murdoch University.  In 2008 he was made a Companion of the Order of Australia.

Professor Gallop has published two books - one on the English Radical Thomas Spence - Pig's Meat - Selected Writings of Thomas Spence, edited with an introductory essay (Spokesman Books Nottingham, 1982) and the other on Western Australian politics and society - A State of Reform: Essays for a Better Future (Helm Wood Publishers, Wembley, 1998).

After retiring from politics in 2006 he was appointed Professor and Director of the Graduate School of Government at the University of Sydney. He is a frequent guest lecturer and commentator on social and political issues and has initiated a range of executive education programs for governments in Australia and overseas.  In 2007 Professor Gallop was appointed Deputy Chair of the Council of Australian Government (COAG) Reform Council. In February 2008 he was appointed to the National Health and Hospitals Reform Commission.  He is also on the board of the Cape York Institute and is a community representative on the Greater Metropolitan Clinical Taskforce (NSW Health ).