The Greatest Injustice: why we have failed to improve the health of Aboriginal people

A former Australian of the Year, Professor Stanley is head of the Telethon Institute for Child Health Research and recognised for her commitment to child health and her leadership of key policy changes. Her concerns about current social impacts on young people are well-known.

The high suicide rates in young Aboriginal people in Fitzroy Crossing in the Kimberley region of Western Australia in recent years prompted a Coronial Inquiry, which met for several months in 2007 with the Coroner, Alastair Hope, delivering his final report in February 2008. I was called to give evidence to the inquiry because of my Institute's long-standing research and interest in Aboriginal health and well being. It gave me an opportunity to summarise not only our research and that of others here and overseas, but to make the case for major government investment to improve Aboriginal outcomes in Australia more generally. Hence I aim to share with you my "manifesto"!

The frustrating and anguishing thing is that we have known what we need to do for 20 years; the evidence has been around in Royal Commissions, HREOC reports, a myriad of government reports as well as our research papers. How to implement is the major issue. Other countries with Indigenous colonised populations have similar problems but are doing much better than Australia - what can we learn from them? Suicides, child abuse and neglect, domestic violence and substance abuse are all outcomes - hence a better understanding of causal pathways to enable effective prevention is crucial to effective long and medium term strategies. But what do we do to help so many damaged kids now? Most deaths in young people are avoidable and we have the knowledge to prevent them. However, Aboriginal human capacity is limited - over 50% of their population is aged under 20 years, over 30% of births are to girls aged under 19 and for each Aboriginal child there is on average only one adult compared with other Australian kids who average three. And many of the Aboriginal adults are sick, mentally ill, in prison or in need of care themselves. This depleted human capability needs to be factored into any service planning which demands Aboriginal participation.

A major and continuing aspect, which has never been appropriately acknowledged or managed, is the effect of the Stolen Generation. Our data document clearly the extent and impacts of the forced removal of children from families and people from land on today's children. I believe that this factor is a major explanation for much of today's dis-ease in Aboriginal populations. The Canadians have set up a major healing initiative some years ago, which we in Australia should consider.

The most sustainable and important recommendation I want to discuss relate to how we enhance an effective Aboriginal workforce as not only does that bring economic power to families, but also raises self esteem and longer term success. I will discuss all these and leave you with a commitment and a sense of hope that we can and must collectively tackle this major human rights issue in Australia. 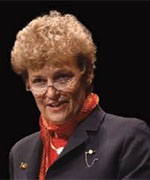 Professor Stanley is the Founding Director of the Telethon Institute for Child Health Research; Chair of the Australian Research Alliance for Children and Youth; and Professor, School of Paediatrics and Child Health at the University of Western Australia. Trained in maternal and child health epidemiology and public health, Professor Stanley has spent her career researching the causes of major childhood illnesses such as birth defects. Her research includes the gathering and analysis of population data for epidemiological and public health research; the causes and prevention of birth defects and major neurological disorders, particularly the cerebral palsies; patterns of maternal and child health in Aboriginal and Caucasian populations; various ways of determining the developmental origins of health and disease; collaborations to link research, policy and practice; and strategies to enhance health and well-being in populations.

Her major contribution has been to establish the Telethon Institute for Child Health Research, a unique multidisciplinary independent research institute focussing on the causes and prevention of major problems affecting children and youth. She sits on the Prime Minister's Science, Engineering and Innovation Council as well as the Australian Statistics Advisory Council.

For her research on behalf of Australia's children, she was named Australian of the Year in 2003 and in 2006 she was made a UNICEF Australia Ambassador for Early Childhood Development.