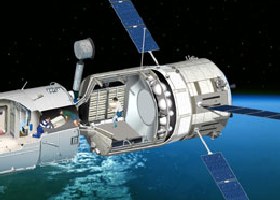 The countdown to the launch of Australia's first satellite in more than 30 years has begun for UniSA researchers, who are gearing up to play a leading role in the historic space project.

FedSat, the first project of the Cooperative Research Centre for Satellite Systems, has been scheduled for launch at the Tanegashima Space Centre in Japan on December 14 (midday Adelaide time).

A team of UniSA and other CRC engineers and researchers are spending the next 10 days preparing the ground station at Mawson Lakes to take control of the satellite following launch.

UniSA Director of the Institute for Telecommunications Research (ITR) Professor Bill Cowley said the SA connection would be vital to the success of the satellite and the research payloads it carries. The Mawson Lakes ground station is the only facility in the world set up to control the satellite and its experimental payloads.

The spacecraft will carry advanced communication, space science, navigation and computing payloads developed by the CRC research partners, with international collaboration including the United States National Aeronautics and Space Administration (NASA). Data from the scientific payloads will contribute to international research programs and to the research programs of the Centre.

The team at ITR will also be responsible for testing an advanced digital communications system installed in FedSat, which is capable of being of being re-configured in space under control from the ground station. This development has shown great promise and will be used experimentally in at least two other satellites being constructed by research bodies in Korea and Singapore.

Dr Embleton said under the agreement the Japanese space agency would provide the launch service in exchange for access to scientific data FedSat, a research satellite, would collect.

He said FedSat would conduct initial research missions in communication technologies, global positioning systems (GPS), computing and space science over the next three years, and was expected to orbit 800km above the earth for several decades.

"December 14 is going to be a momentous day for the space industry and space research in Australia," Dr Embleton said.

"Australia has essentially been out of the satellite space game for so many years, the future of the nation's space endeavours will be boosted tremendously by FedSat."