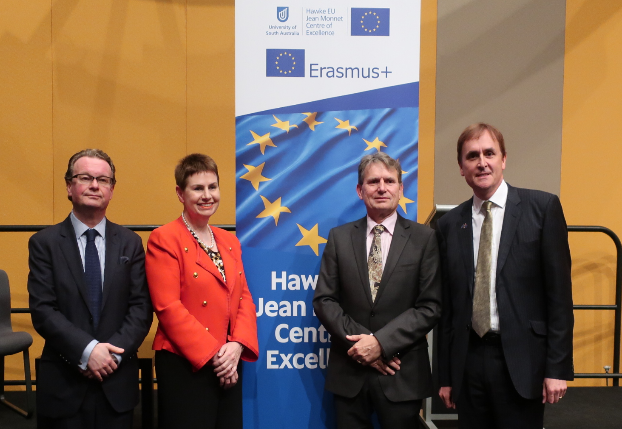 On Wednesday 26 September, EU Ambassador to Australia, H.E. Dr Michael Pulch, gave the Hawke EU Jean Monnet Centre of Excellence's Inaugural Lecture. The Lecture was co-hosted by the Bob Hawke Prime Ministerial Centre, and was on the topic of: 'Towards a new relationship with Europe: Why 2018 could become a game-changer year for Australia'.

Dr Pulch's wide ranging lecture was introduced by the Chancellor of the University of South Australia, Ms Pauline Carr, and followed by an in-conversation interview by Executive Director of the Hawke EU Jean Monnet Centre of Excellence, Prof Anthony Elliott. The wide-ranging discussions that occurred over the evening covered the Free Trade negotiations between the EU and Australia, Brexit and its consequences for Australia's interaction with continental Europe, international action on climate change and the current global geopolitical landscape with increasing European-Russian tensions. Dr Pulch questioned whether it was time to revisit the EU-Australia partnership that for a long-time had been marred by differences over agricultural policy, market access and climate change, as there is now a new push to liberalise bilateral trade and intensify cooperation in a whole range of areas covering foreign and security policy, science and technology, climate change and energy, education and culture.

LISTEN TO THE PODCAST OF THE LECTURE