The Future of the EU Summit

The Future of the EU Summit

The United Kingdom’s withdrawal from the European Union (EU) after more than four decades poses significant challenges for the world’s largest economic and political union.

Just over a year after Brexit, the Hawke EU Centre for Mobilities, Migrations and Cultural Transformations hosted ‘The Future of the EU Summit’ to bring together EU specialists, academics, policy analysts and public servants from across the globe for a day of discussion over the pressing issues facing the world post Brexit.

The Summit was an opportunity to discuss the prospects for multilateral cosmopolitanism – the idea that urgent global issues must be addressed by multilateral institutions internationally – and the shifting political dynamics in the EU, with a focus on EU-Australia relations.

Forming part of the Joint EU Centres Conference held in conjunction with an event earlier in the week at RMIT in Melbourne, the Summit consisted of two keynote addresses and panel discussions before culminating in a dialogue with the wider audience.

EU Ambassador to Australia, His Excellency Dr Michael Pulch presented a wide-ranging opening address focused on a number of issues, including migration, terrorism, populism, nationalism and trade, with suggestions for possible approaches towards these issues.

Migration and terrorism are undoubtedly two major issues facing Europe and the world today. In discussing migration (including forced migration), Dr Pulch emphasised the importance of addressing the root causes for migration rather than only the symptoms and the consequences. Moreover, Dr Pulch urges a horizontal approach to terrorism and organised crime, in which he believes internal coordination and links among different countries is central to addressing the issue.

Dr Pulch remarked upon the social and political impacts of increasing mobility in Europe, touching on populism and nationalism, which he believes both have a significant influence on foreign policy decisions. Whilst he agrees populism is currently contained in Europe, he also indicates that it is an area for improvement as the issue is not entirely ‘defeated’.

Dr Pulch concluded by emphasising how positive he feels towards the future of EU and Australia relations, though reiterating he believes there is more that can be done, and needs to be done, by both parties. He also noted that the EU’s impact post Brexit should not be underestimated, as he considers the EU the most important investor in and trading partner with Australia.

Professor of European Integration at the University of Athens, Loukas Tsoukalis delivered the second keynote address on ‘Europe’s Multiple Crises, and the Way Out?’.

President of the Hellenic Foundation for European and Foreign Policy (Greece’s main think tank), Professor Tsoukalis was an important voice in the dialogue focussing on economic globalisation and technology advancements.
A notable part of Professor Tsoukalis’s keynote was his reference to the impact of neo-liberalism on the EU where he believes we are witnessing the end of an era in a political sense.

These key presentations were complemented by two expert panel discussions. Both panels consisted of members who each gave an overview of their area of research and overall outlook on the issue at hand. Nineta Barbulescu, Ambassador of Romania to Australia, was among the panellists.

Ms Barbulescu holds a very positive outlook on the EU, reflecting back on Europe’s past and its involvement in World War I, World War II and the Cold war.

Ms Barbulescu believes Europe’s current situation with Brexit and the global financial crisis is incomparable to these past events that Europe managed to survive and thrive after, and thus that it is important to remember there is ‘life after Brexit’.

As with all of the speeches and discussion that occurred at the ‘Future of the EU’ Summit, Ms Barbulescu’s contributions significantly dealt with the pressures and opportunities that arise from multilateral cooperation across Europe and the world. 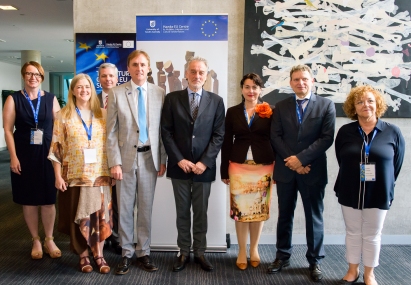