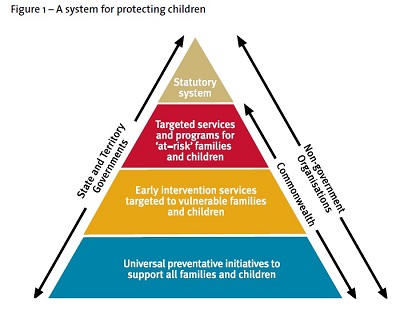 In 2005, the year of the Australian Centre for Child Protection’s establishment, there were more than 250,000 reports of suspected child abuse made to Australian child protection services. These services were largely focused on a reactive approach - responding to harm to children once it had occurred rather than working to prevent harm to children.

The Australian Centre for Child Protection has been instrumental in changing the way we think about child protection as a society. Learning from the health sector’s recognition of the importance of health promotion and disease prevention in decreasing the burden on hospitals, the Centre has undertaken sustained research and advocacy to promote the adoption of a public health approach to protecting vulnerable children.

Applied to child abuse and neglect, a public health approach comprises health promotion and prevention strategies available to the whole population. These include additional targeted interventions for vulnerable populations, as well as specialist protective and therapeutic interventions for populations where child neglect or mistreatment has occurred.

In 2009, the Council of Australian Governments adopted the public health approach advocated by the Centre as the underpinning framework for child protection in Australia in the National Framework for Protecting Australia’s Children 2009-2020. The Centre helped shape the national framework and has a continuing role in overseeing its implementation through representation on the national steering committee.

Working together with: the Coalition of Organisations Committed to the Safety and Wellbeing of Australia’s Children (led by Families Australia), the Australian Government and State and Territory Governments