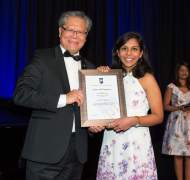 UniSA student Santhni Subramaniam has been awarded the 2017 Sir Eric Neal Award by the Australia-Malaysia Business Council of South Australia at the recent Merdeka Awards.

Santhni, a Bachelor of Pharmaceutical Science student, was announced the winner of the prestigious award at the Merdeka Gala Dinner last month, an event which offers a number of scholarships and prizes to outstanding final-year Malaysian students living and studying in Adelaide.

Santhni took out the top prize, named after the Patron of the Merdeka Awards and former Governor of South Australia, Sir Eric Neal, AC CVO, in recognition of her academic excellence and significant contributions in fostering bilateral relationships between South Australia and Malaysia.

Although Santhni has a long list of academic achievements, including being invited to join the Golden Key International Honour Society at UniSA, it is her efforts outside of her studies that she is most proud of.

“I have dedicated a large amount of my time in Adelaide to volunteering roles, as I am passionate about giving back to the community that has welcomed me with open arms since my arrival,” she says.

The event, attended by representatives from both corporate and government organisations across Malaysia and Australia, also celebrates Malaysian Independence Day while raising funds for charity. This year’s proceeds went to supporting people with disabilities attend training programs offered by Bedford Group Australia and Daybreak Malaysia.

As part of the awards the Australia-Malaysia Business Council of South Australia aims to place winners into internships with key South Australian businesses to offer graduates the chance for professional development while fostering network opportunities between Australia and Malaysia.

It’s not the only award Santhni has collected as part of her studies this year. She was recently honoured at the 2017 StudyAdelaide International Student Awards in the Academic Excellence – Undergraduate category as well as receiving a Special Commendation as runner-up for the International Student of the Year.

Santhni says she dedicated her StudyAdelaide award to her parents and the teaching staff at UniSA.

“They are the backbone of my achievements,” she says.

Find out more about her win at the 2017 StudyAdelaide International Student Awards. 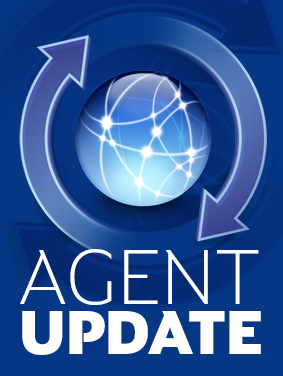