South Australian photographer Tony Lewis presents a triptych of his favourite food-oriented work for The Hawke Centre and Tasting Australia – a collection  of the food of iconic cooks Cheong Liew and Maggie Beer, and a look at life in the Adelaide Central Market.

Tony has worked with both Maggie and Cheong over a number of  years, and has photographed (and been fortunate enough to eat)  many of their dishes.

He has loved the Central Market for years too, and has documented some of its unique character. The images he’s  gathered take us behind the scenes at the market, showing aspects of life there not usually seen by its customers.

Tony Lewis is an Adelaide-based photographer whose career began in newspapers in the early ‘80s.  Press photography took him to The Times in London, The Sydney Morning Herald, and back to Adelaide for The Australian.  20 years as a press photographer taught him how to work with people, think on his feet, and capture the moment.

Tony went freelance in 2000, and has since combined his passions for food, wine and the arts in his work, producing photos for food and wine companies and for magazines.

About the Three Food Icons 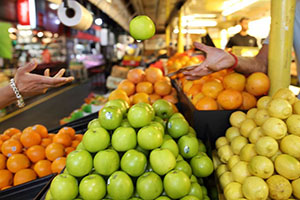 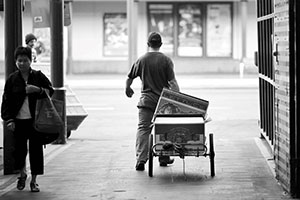 Today, with over 80 traders under one roof, the Adelaide Central Market is one of the largest under cover markets in the Southern Hemisphere, buzzing with life and colour all year round. The Market offers a huge range of fresh food including fruit and vegetables, meat and poultry, seafood, cheeses, bakery, smallgoods and health foods, along with some of Adelaide’s most popular cafes and eateries. With over 8.5 million visitors every year, the Adelaide Central Market remains the food Mecca for multicultural cuisine and fresh produce. 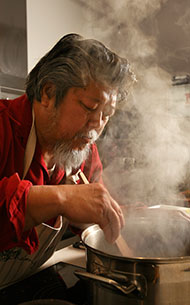 Growing up in Kuala Lumpur, Cheong Liew’s life was filled with the aromas and spices of Malay, Indian and Chinese cooking. At the heart of his love of food were the days spent in his grandmother’s kitchen. When he arrived in Australia in 1969, he supported himself working in Melbourne in pubs and railway cafes and ended up cooking for most of his housemates. He then moved to Adelaide, in the early 70’s, to be near his brother and found himself working as a grill cook, from here he was headhunted by a Greek restaurant, where he swiftly mastered Greek cooking. It was during this time that Cheong bought an Elizabeth David cookbook and began to teach himself French cooking, which led in turn to a job in a French restaurant. He had no formal training, but his enthusiasm, his desire to experiment and his uncanny ability to blend cuisines with his Malaysian heritage made every chef, and every diner around him sit up and take notice.

In 1975, he became the owner of the popular Adelaide restaurant Neddy's, where the menu consisted of mostly Malaysian and Chinese dishes. He used ingredients in his cooking not many other chefs dared to use at that time; such as pigs feet, whole ducks, and pigs heads. The restaurant closed in 1988 and Liew went on to become a cookery teacher. In 1995 he opened The Grange restaurant at the prestigious Hilton Hotel in Adelaide.

In 1999 he was awarded an AM "for service to the food and restaurant industry through involvement in developing and influencing the style of contemporary Australia n cuisine.”

Regarded as one of Adelaide's treasures, Cheong was honoured by the prestigious United States magazine Food & Wine as one of the 10 "hottest chefs alive, and has been inducted into the Hall of Fame in the World Food Media Awards. 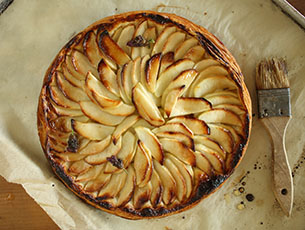 In 1973, Maggie Beer and husband Colin settled in the Barossa Valley, with the intention of breeding game birds. The establishment of their farm and vineyard led to the legendary Pheasant Farm Restaurant, long gone but part of the food history of South Australia as the restaurant became highly acclaimed and was, in 1991, awarded the Remy Martin Cognac - Australian Gourmet Traveller Restaurant of the Year award. With the closure of the restaurant in 1993, Maggie was free to pursue new directions, and in 1996 the Production Kitchen in Tanunda was opened.

These days, her career spans farming, food production, as well as television presenting and food writing. Maggie's appearance on the hit ABC programme The Cook & The Chef cemented her place as one of Australia's most well-known food personalities, and her line of products is a much loved range for Australian gourmets. Of all the accolades given to Maggie, being chosen as Senior Australian of the Year in 2010, and then South Australian of the Year 2011, have been two enormous highlights of a truly busy life. In addition to these achievements, Maggie was thrilled to be appointed a Member of the Order of Australia (AM) for her service to tourism and hospitality on Australia Day in 2012.

Her appearances on television have been numerous, with the most notable being her involvement with MasterChef Australia, setting new ratings records for the episodes she featured in. Maggie’s latest television venture sees her join Matt Moran as co-hosts of The Great Australian Bake Off.