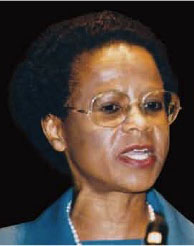 "The promotion of human rights and human development is not only the right thing to do for all levels of the global community. It is also the finest expression of the best in us as a human race. It is in seeing ourselves in others that we will not be able to tolerate their misery and suffering. The "I" in "You" is the best guarantee for a better world for all of us. It is also the best guarantee for a more peaceful world in which all have a real stake.

How do we give expression to our need to live up to these values? For our part, we at the World Bank have revolutionised our approach to development over the past five years in adopting a holistic framework that promotes social investment in people – their education, their health, their nutrition, their welfare; protects the environment; encourages private sector involvement; strengthens the ability of governments to serve their people, including a fight against the scourge of corruption; and encourages the reforms that provide a stable macroeconomic basis for sustainable growth. Development is not just an economic issue – it is profoundly a human endeavor.

The challenge for Australians is to identify the key contributions you can make, coming as you do from a country with a high level of education, achievement and prosperity. You have much to offer – and it is very much in your interests to seize the opportunities offered by information technology and the revolution in communications to overcome what you used to call the tyranny of distance. This is no longer an excuse. You have already demonstrated your ingenuity in overcoming the great distances in your own country. You have a historic opportunity to play a decisive role in helping those parts of the global community that are struggling to meet the challenges of human development. Your challenge is to link your comparative advantages in many fields to the global partnerships now coming into play in all kinds of exciting and innovative ways. A better world for all is in our grasp."

Dr Mamphela Aletta Ramphele was born in the Bochum District in Northern Transvaal (now Limpopo). She has been a student activist, a medical doctor, a community development activist, a researcher, a university executive, a global public servant and is now an active citizen in both the public and private sectors.

Following the Soweto uprising in 1976, she was detained without trial, released after five months and soon afterwards served with an apartheid banning order. She was one of the founders of the Black Consciousness Movement with Steve Biko and Barney Pityana and others.

Ramphele joined the University of Cape Town as a research fellow in 1986 and was appointed as one of its Deputy Vice-Chancellors in 1991. She was appointed to the post of Vice-Chancellor of the University in September 1996, thereby becoming the first black woman to hold such a position at a South African university. In 1994, Ramphele was a visiting scholar at Harvard University's Kennedy School of Government in Cambridge, Massachusetts, USA.

Dr Ramphele is the author of several books and publications on socio-economic issues in South Africa. She has received numerous national and international awards acknowledging her scholarship and leading role in spearheading projects for disadvantaged people in South Africa and elsewhere.

Dr Ramphele has served as chairperson of Gold Fields, Circle Capital Ventures (Pty) Limited, Technology Innovation Agency (TIA), as a director of Medi-Clinic Corporation Limited and Remgro Limited and is currently a trustee of both the Nelson Mandela and Steve Biko Foundation. She was founder of the Open Society Foundation for South Africa and the Citizens Movement.

In 2000, Ramphele became one of the four Managing Directors of the World Bank. She was tasked with overseeing the strategic positioning and operations of the World Bank Institute as well as the Vice-Presidency of External Affairs. She is the first South African to hold this position. Ramphele is a trustee of the Nelson Mandela Children's Fund, and has served as the director of the Institute for a Democratic Alternative for South Africa (IDASA) and as a board member of the Anglo-American Corporation, Medi-Clinic Holdings and Transnet.