MH370 and MH17 Disaster and Crisis:
An Examination of Australia’s Response

A Malaysian aircraft disappeared on 8 March 2014 without a trace over the Indian Ocean with 239 people aboard.  As the area is in Australia’s search and rescue responsibility, our Government leads the international response to the disaster.

Four months later another Malaysian aircraft was shot down over a war zone in eastern Ukraine.  The 298 people aboard were killed, including 38 Australians. The Australian Government takes immediate action to manage the crisis to protect our interests.

Sir Angus was directly involved in both crises and in this year’s Annual Hawke Lecture, he will examine the circumstances and Australia’s response to the disasters. 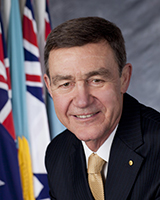 Air Chief Marshal Sir Angus Houston AK, AFC (Ret’d) was awarded the Knight of the Order of Australia in January 2015 for extraordinary and pre-eminent achievement and merit in service to Australia, through distinguished service in the Australian Defence Force, continued commitment to serve the nation in leadership roles, particularly the national responses to the MH370 and MH17 disasters, and in a variety of roles in the community.

Sir Angus is Chair of Airservices Australia, Chair of Defence South Australia Advisory Board, Chair of the Order of Australia Council and Chair of the Canberra Symphony Orchestra. He is a Board Member of the Lowy Institute for International Policy, the Australian Cancer Research Foundation, the Anzac Centenary Public Fund Board and GreaterGood Canberra. In addition, he is patron of numerous charitable organisations. In June 2015 Sir Angus was appointed as the South Australian Special Envoy for International Trade and Investment.

Sir Angus is married to Liz and they have three sons and two grandchildren. In 2011, he was named the Australian Father of the Year and in 2012, the ACT Australian of the Year.