Consensus and Dissent in Australia

Bob Hawke was famous for his commitment to a search for consensus in politics and in industrial relations.  It was the theme of his Boyer Lectures and a feature of his leadership of the union movement and the nation.
This year's Hawke Lecturer, Justice Kirby, has the highest dissenting rate in the history of the High Court, even out-flanking the dissents of Justice Issacs, Justice Evatt and Justice Murphy.  In his Hawke Lecture, Justice Kirby will explore consensus and dissent in society.  When is it appropriate, in the law and in the community, to seek agreement?  And when do we have to stand up and disagree?  By reference to law and life, this year's Annual Hawke Lecture will examine consensus and dissent in Australia. 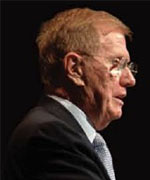 Justice Michael Kirby of the High Court of Australia.  Justice Kirby is now the longest serving judicial officer in the nation.  He was first sworn in as a Deputy President of the Australian Conciliation and Arbitration Commission in December 1974.  In February 1975 he was appointed inaugural chairman of the Australian Law Reform Commission.  He held that post until 1984.

Famously, he gives his recreation as work but lately he has begun to ponder life after the High Court which he must leave early in 2009.