We respectfully acknowledge the Kaurna, Boandik and Bangarla First Nations Peoples and their Elders past and present, who are the First Nations’ traditional owners of the lands that are now home to the University of South Australia’s campuses in Adelaide, Mount Gambier and Whyalla.

Throughout this page, the term ‘Aboriginal’ refers to Aboriginal and Torres Strait Islander peoples, collectively.

UniSA is the University of Choice for Aboriginal People. Since its founding, UniSA has demonstrated an ongoing commitment to Aboriginal engagement through its founding act and important initiatives such as the Aboriginal Taskforce, Australia’s first Aboriginal Tertiary Program, and Aboriginal Studies programs. UniSA was the first university in South Australia to have a Reconciliation Action Plan (RAP), a guiding document to advance reconciliation across the organisation. Professor Irene Watson, the University’s inaugural Pro Vice Chancellor: Aboriginal Leadership and Strategy and David Unaipon Chair has led the development of our second RAP, in which we commit to the objectives of the Universities Australia Indigenous Strategy, 2017-2020.

At its core, the Stretch RAP is student-centric. Supporting Aboriginal students to achieve success which is centred on providing a culturally safe and appropriate environment, one in which students can see tangible evidence of the University’s commitment to a two-way relationship with Aboriginal People. The breadth of deliverables, from advancing student outcomes, building cultural awareness amongst staff and students, and enhancing Aboriginal research and its impact, speak to the whole of university approach that is fundamental to providing a culturally safe space in which our students can succeed.

The Strategy was launched at UniSA Research Day in November 2019, at which UniSA Elder in Residence, David Rathman, AM, PSM, FIML gave the keynote speech. An audio recording of Uncle David's speech is available here.

The Strategy positions UniSA nationally, by clearly articulating a two-way knowledges approach and identifying actions which enable the strategy to be embedded across the research space. The Aboriginal Research Strategy supports the inspired and partnered excellence in the University's Strategic Plan for Research and Innovation for 2016 - 2020.

Wirringka Student Services offers Aboriginal students a friendly, comfortable and supportive place to study on each campus. There is an Aboriginal Student Engagement Officer on each campus who is available to answer questions and provide assistance with navigating your University experience, applying for scholarships, and pursuing your academic goals.

Aboriginal Pathway Program (APP) is a one and a half year program that supports students with no previous qualifications for university study. The program is open to all people who identify as Aboriginal and can lead to entry into a university degree at the University of South Australia.

UniSA has a long-standing aim that Aboriginal Peoples comprise at least 2% of its workforce and is committed to improving employment opportunities, supporting professional development, and creating a culturally safe and supportive workplace for Aboriginal staff members. Our workforce participation target is guided by an array of policies and a rolling employment strategy; Yaitya Warpulai Tappa (Aboriginal Work Path).

UniSA is proud to offer the Aboriginal MBA (AMBA) Scholarship in partnership with industry. It is well known that a Master of Business Administration (MBA) is a pathway to leadership and career progression. Our dedicated scholarships actively address leadership inequality and champion Aboriginal Australians with leadership potential, to advance their careers into senior management and executive roles.

Organisations that partner with us on this initiative show their commitment to achieve equality in leadership, support the growth of the talent pipeline and foster positive economic growth for the nation.

AIME
Since 2013, UniSA has partnered with the Australian Indigenous Mentoring Experience (AIME) to provide a mentoring program that supports Aboriginal high school students to develop the skills, opportunities, belief and confidence in their cultural safety to finish school. Every year, hundreds of Aboriginal high school students are mentored by UniSA volunteer mentors. Guided by the values of ‘Indigenous = Success’ and ‘No Shame at AIME’, AIME have demonstrated their ability to dramatically improve the number of Aboriginal students that finish school. In 2015, UniSA’s long-term commitment to the partnership with AIME was consolidated through the signing of a 10-year Mutual Statement of Commitment.

GO Foundation
UniSA GO Scholarships recognise outstanding academic merit by high-achieving Aboriginal students seeking to study at the University in a range of programs. Adam Goodes’ and Mick O’Loughlin’s GO Foundation partners with organisations to create opportunities for Aboriginal youth through education. The UniSA GO scholarship ($6000 a year, up to four years) expands the work of GO Foundation with the support of the South Australian Government.

Indigenous Defence Consortium
UniSA and the Indigenous Defence Consortium are collaborating to create opportunities and pipelines for Aboriginal students to enter the Aboriginal business sector. Through this partnership, UniSA is supporting skills development in areas such as science and systems engineering, business administration, supply chain management, business marketing and growth and entrepreneurship.

Reconciliation
UniSA is committed to promoting reconciliation to deepen the respect and relationships between Aboriginal People and other groups within the university. We understand that reconciliation encourages cultural change that will deliver better opportunities and outcomes for Aboriginal staff and students.

The first time a Vice Chancellor has been welcomed to South Australian lands by the traditional owners at a university graduation ceremony. 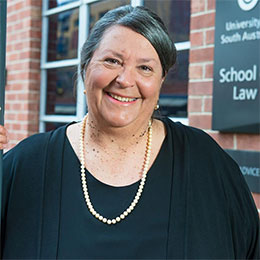 In 2016 Professor Irene Watson was appointed Pro Vice Chancellor for Aboriginal Leadership and Strategy and Unaipon Chair, a new senior management position created to further enhance the University’s commitment to Aboriginal engagement. Professor Watson has responsibility for leading the development of a whole-of-institution approach to the recruitment, support, retention and success of Aboriginal people at UniSA.

A Tanganekald, Meintangk-Bunganditj woman, solicitor, representative for First Nations Peoples at the United Nations and researcher, Professor Watson will provide strategic leadership and advice to staff at the University to develop the kinds of relationships across the community – in business, government and professional bodies – that support Aboriginal student and staff engagement.

Professor Watson graduated with a Bachelor of Law from the University of Adelaide and received the Bonython Law School prize for her doctoral thesis in 2000.

She was awarded a three-year postdoctoral fellowship by the University of Sydney and took up an appointment with UniSA in 2008.

Since 1989, Prof Watson has taught in all three South Australian universities and she continues to combine teaching with academic research today.

In 2013, she received an ARC Indigenous Discovery Award and has completed the project – Indigenous Knowledge: Law, Society and the State.

She has had a close relationship with the Aboriginal Legal Rights Movement in South Australia since its inception in 1973, serving as a member, solicitor and director.

She served as a front-line solicitor advising the legal service on the Royal Commission into Aboriginal Deaths in Custody and has advised numerous communities across Australia on law and justice issues.

Our commitment to Aboriginal education