The Hawke Centre is delighted to partner with the Iranian Film Festival Australia and Mercury Cinema to co-present the opening night film I'm Not Angry, screening Friday 31 October, 7pm.  This stunning film from writer-director Reza Dormishian (Hatred, IFFA 2012), is a love story set amidst the Green Movement and the wave of political protests in 2009.

Also join us for an Australian Exclusive -  In-Conversation with Baran Kosari to discover more about the film and the Iranian film industry, Saturday 1 November, 2.30pm.

Kosari, who was active in the Green Movement in Iran, has a long track record for choosing strong roles dealing with major social issues and those with heavy political content. In I'm Not Angry, she plays the lead female role - a political activist caught up in the protests.

Baran Kosari is one of Iran's best known younger actresses, and has won a Crystal Simorgh and an Asia Pacific Screen Award. She is the daughter of director Rakhshan Bani Etemad, and film producer Jahangir Kosari.

Kosari has worked with many major Iranian directors, including Asghar Farhadi, and one of Iran's leading female Directors, Rakhshan Bani Etemad.  She has tackled controversial roles, examining issues such as: police in corruption in Iran, in Absolutely Tame is a Horse; 'blood money' in Dancing in the Dust; and the role of women in the Iran-Iraq war in Gilaneh. Some of her early roles focussed on womens' issues, including Nargess, Rusari-ye Abi (The Blue-Veiled), and The May Lady. 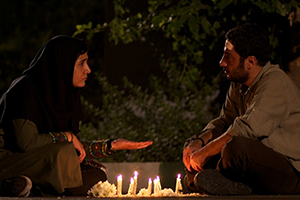 This stunning second film from writer-director Reza Dormishian (Hatred, IFFA 2012) is a love story set amidst the Green Movement and the wave of political protests in 2009. Setareh (Baran Kosari) and Navid (Navid Mohammadzadeh), an Iranian Kurd, are both political activists who meet at university and participate in political rallies together.

The film does not only tell the story of the lead actors, but also the wider political climate in Iran at this time. Award winning performances, dynamic music and script make this controversial film unmissable.

Book tickets for the opening screening.