Dame Quentin Bryce<br> In Conversation with Anne Skipper AM

The Honourable Dame Quentin Bryce AD CVO will be in conversation with Anne Skipper AM to launch her book: Dear Quentin, Letters of a Governor General.

As Australia's first female Governor-General, Quentin Bryce handwrote more than fifty letters each week. She wrote to those she had met and connected with as her role took her from palaces to outback schools, from war zones to memorials, from intimate audiences to lavish ceremonies. Generous, witty and always heartfelt, her letter-writing skills were honed at boarding school, from where she would write to her parents every Sunday.

This book is a rich collection of the letters the Governor-General wrote and received during her six-year term to prime ministers Rudd and Gillard, VC Mark Donaldson, pals Anne Summers and Wendy McCarthy, Indigenous elders, war vets, Girl Guides and grandchildren.

Join us for this book launch and the opportunity to gain an insight into one of Australia's most admired and respected leaders. 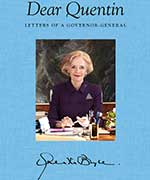 Royalties from this book will be donated to the Murdoch Childrens Research Institute. MCRI is the largest child health research institute in Australia and one of the top five worldwide. Its team of more than 1900 talented researchers are dedicated to making discoveries to prevent and treat childhood conditions.

Recent Press: Stamped with Affection
Recent Press: Behind great women Dame Quentin Bryce prods and says 'Get in there!' 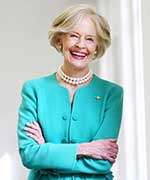 She remains a pioneer in contemporary Australian society, and yet one who brings more than forty years of experience in reform, community building and leadership. In 2016 she was chair of the Queensland Premier’s Domestic and Family Violence Implementation Council. More information 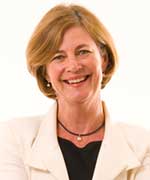 Anne Skipper is a successful and experienced businesswoman with a diverse career as a nurse, public relations consultant, change agent, business owner, board director, mentor and public advocate for disadvantaged communities within Australia and overseas.

Anne has more than 25 years’ experience as a board director and chair of government, not-for-profit and private sector boards in the areas of health, planning and development, tourism, education, disability and social services, and financial services. More information