Award-winning Australian author Thomas (Tom) Keneally AO is one of Australia's most prolific and best known novelists. As the multi-award-winning author of more than 30 novels, dramas, screenplays and books of non-fiction, he is also one of its most distinguished. In 1982 he won the Booker Prize for Schindler's Ark, which was made into the Academy Award-winning film Schindler's List. His novels The Chant of Jimmy Blacksmith, Gossip from the Forest and Confederates were all short-listed for the Booker Prize, while Bring Larks and Heroes and Three Cheers for the Paraclete won the Miles Franklin Award.

Born in Sydney in 1935, Tom studied for the priesthood as a young man and then began a career in school teaching before his literary success enabled him to become a full-time writer. In addition to the Booker Prize and the Miles Franklin Awards, Tom Keneally has also won the Los Angeles Book Prize, the Royal Society of Literature Prize, the Scripter Award of the University of Southern California, the Mondello International Prize and the Helmerich Prize (U.S.). Tom Keneally's history of Irish convictism, The Great Shame and The Commonwealth of Thieves about the penal origins of Australia were both published in all the English language markets. He has also published three volumes of A History of Australians and the story has now reached 1970. More recently he has published Three Famines, a narrative history of famine, and the novel, The Daughters of Mars. Tom Keneally holds a number of national and international honorary doctorates. In 1983 he received the Order of Australia for his services to Australian Literature and in 1997 was declared one of Australia's ‘100 Living Treasures'.

Tom will be receiving an Honorary Doctorate from the University of South Australia at a Graduation Ceremony on Wednesday 29 March prior to this event. We look forward to celebrating this honour with him at our event.

Thomas will be in conversation with Julia Lester. Julia has worked as a Radio Broadcaster and Producer, TV Current Affairs Reporter, Public Speaker, MC of events concerts and conferences, Interviewer, News Journalist, Teacher, Actor and Musician. 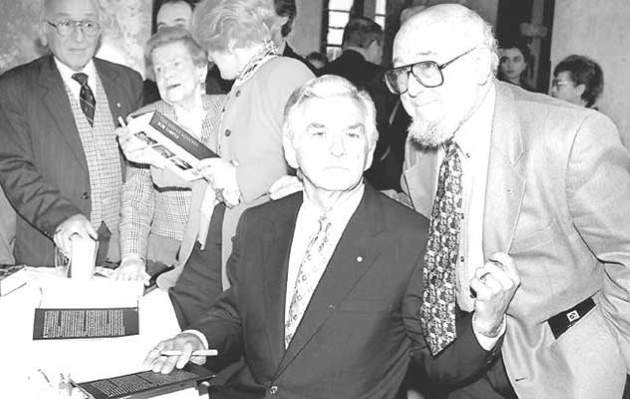 Bob Hawke AC and Tom Keneally at the book launch of: "The Hawke Memoirs" launch, Museum of Contemporary Art in 1994.