Stan Grant: Talking to My Country

In 2015, as the debate over Adam Goodes being booed at AFL games raged and got ever more heated and ugly, Stan Grant wrote a short but powerful piece for The Guardian that went viral, not only in Australia but right around the world.

His was a personal, passionate and powerful response to racism in Australian and the sorrow, shame, anger and hardship of being an Indigenous man. 'We are the detritus of the brutality of the Australian frontier', he wrote, 'We remained a reminder of what was lost, what was taken, what was destroyed to scaffold the building of this nation's prosperity.'

Stan Grant was lucky enough to find an escape route, making his way through education to become one of our leading journalists. He also spent many years outside Australia, working in Asia, the Middle East, Europe and Africa, a time that liberated him and gave him a unique perspective on Australia. This is his very personal meditation on what it means to be Australian, what it means to be Indigenous, and what racism really means in this country.

Talking to My Country is not just about race, or about Indigenous people but all of us, our shared identity. Direct, honest and forthright, Stan might not have all the answers but he wants us to keep on asking the question: how can we be better? 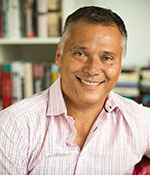 Stan is a Wiradjuri man. From western New South Wales to the city streets of New York, London, Paris, Rome, and Shanghai via Afghanistan, Pakistan and Iraq Stan Grant has lived his life on the road. He learnt the art and joy of storytelling from his parents – his father a Wiradjuri man and his mother from the Kamilaroi people. These were tales of survival, hardship and pride. They told a different side of Australia’s history; here people did not all rejoice, there was little wealth for toil. This was the story of Australia’s Indigenous people and the brutality of colonisation.

Through education and tenacity Stan has carved out a career as one of this country’s leading journalists. He has been a political correspondent for the ABC, a news and current affairs anchor for the Seven network and SBS and for more than a decade he was a foreign correspondent for CNN based in Asia and the Middle East. His reporting from war zones, the closed worlds of Myanmar and North Korea, tsunami ravaged Sri Lanka and the booming new China has won him some of the world’s most prestigious journalism awards. Now he is back home tackling the story closest to him. He is the International Editor for SkyNews, Managing Editor of National Indigenous Television and Indigenous Affairs Editor at The Guardian. Talking to My Country is his second book. The Tears of Strangers