Where To From Here, Australia?

Investing in innovation and economic growth in a down turn is strategically clever. This means that when the world economy improves, Australia is ready to take full advantage.  Slowing growth in China may be affecting our mining industry and royalties but there is cause for optimism.

There is a long list of Australian industries which lend themselves to the commercialisation and export of their innovation and smarter services. That is where our future economic growth and jobs will come from and where our focus should be in partnership with industry and our key research universities.

How do we do it? Peter Beattie suggests we start with the future of mining whose key jobs growth will come from exporting mining services.

Join Peter and others at a reception following this lecture in the Kerry Packer Civic Gallery. 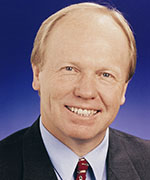 One of the most electorally successful politicians in Australia, Peter Beattie won a series of crushing victories as Queensland Premier and retired undefeated in 2007 after more than nine years in the job. During most of that time he was also the Minister for Trade. He served as the Member of Brisbane Central for 18 years.

In 2008 Peter became Queensland’s Trade Commissioner to North and South America, based in Los Angeles. He then worked as an  advisor and guest lecturer on global economic development strategies at Clemson University, South Carolina.

He is currently the Director of the Medical Research Commercialisation Fund;  Ambassador for Life Sciences Queensland; joint adjunct professor at the University of Queensland’s Australian Institute for Bioengineering & Nanotechnology & Institute for Molecular Bioscience; former member of the University of Queensland's Industry Engagement Council; National Commentator on Sky News and joint host of Beattie and Reith on Sky News.