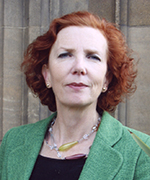 Baroness Janet Royall of Blaisdon PC was Leader of the House of Lords and a member of the British Cabinet under UK Prime Minister Gordon Brown’s Administration. As Leader of the Lords (2008-2010), she held the titles of Lord President of the Council and Chancellor of the Duchy of Lancaster. She has been strongly committed to the advancement of the European project, and has served as Secretary General of the British Labour Group in the European Parliament and as Head of the European Commission Office in Wales.