Marzha/Borders exhibition is showing at the Nexus Gallery from 11 June - 16 July.

This discussion will be followed by the official launch of the Marzha/Borders exhibition at Nexus Arts from 6pm.  Staff will be available to direct guests to the Nexus Gallery, Lion Arts Centre.

MARZHA/BORDERS, a unique exhibition which highlights various socio-political events that have impacted the lives of Afghans inside and outside of the country, particularly over the last three decades and how Afghan artists respond to ongoing conflict in today’s Afghanistan.

Khadim Ali’s work for this group exhibition has been created in collaboration with Afghani artist Sher Ali and engages with the tense political climate of native Afghanistan through the creation of traditional Indo/Persian miniature painting and Afghan rugs.

Artist Khadim Ali : I grew up hearing my grandfather singing Shahnama. Shahnama is an epic poem written in 1010AD in the court of Mahmoud Ghaznawi in Ghazni province of Afghanistan. Shahnama is considered one of the icons of Persian literature. In the book, the hero Rustam signifies the brighten phase of humanity, struggling for its being in the darkness of demonic age.

The author Abdul Qassim Ferdowsi was incapable to immortalize the humanity; thus the demon subsists. I am re-reading Shahnama in the modern context of Afghanistan where there is no national heroic platform. A hero of one ethnic group is a demon to the other.

Begun in 2013, my current project Transitions / Evacuation is a cross-cultural collaboration between Afghani artist Sher Ali and myself that engages with the tense political climate of my native Afghanistan through the creation of traditional Indo/Persian miniature painting and Afghan rugs.

Afghanistan has been a site of near constant colonial struggle in recent history, with British, Russian and now international/Western forces (led by the United States of America) battling for differing, but often abstract reasons. Despite their intentions to combat a terrorist force for ‘humanitarian’ or ‘good’ reasons, Western forces have become increasingly demonised by Afghanis, seen as another invading force of similar ilk to previous occupiers of Afghanistan. This has increased their vulnerability to attacks from Afghan Army Soldiers who see themselves as proud protectors of their “Lion Nation”. There is a shift here in the status quo. 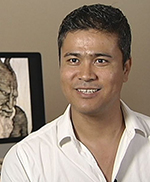 Khadim Ali was raised in exile in Quetta, Pakistan. His grandparents escaped a massacre of Hazaras in Afghanistan in the 1890s, and his parents remained in Pakistan hoping peace would eventually settle in Afghanistan. Due to Taliban violence against Hazaras, the family never returned. Ali migrated to Australia in 2009 on a Distinguished Talent Visa. After Ali’s parents were injured in a suicide bombing in Quetta in 2011, they also moved to Australia.