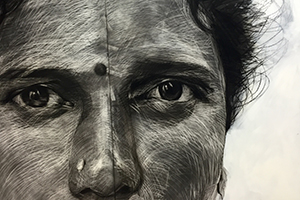 Xenosceptica 3 is the next manifestation of visual artist Daniel Connell’s exploration of and challenges to notions of difference via the encounter generated by the hand-made portrait.

He will present new and selected artworks from
Adelaide and his recent time in Kochi, India. 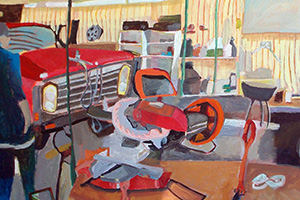 A series of landscape paintings, from artist Sue Michael depicting the blinding dust storms, the heat, cold winds and drought as shaping forces of our state's Mid North.

As she describes 'my ancestors adapted their living spaces with an ingenuity and creative expression that I am only now understanding'.

Her artworks allow her to extract the poetic essence of the location. 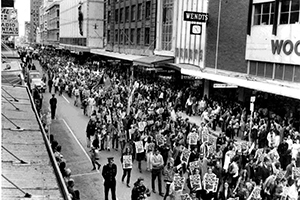 Be inspired by this exhibition celebrating 100 years of women working for peace throughout the world, with a particular focus on South Australian womens’ campaigns.

WILPF, founded in 1915 works for world disarmament, full rights for women, racial and economic justice, and an end to all forms of violence – a just and sustainable world, in which war will not occur. 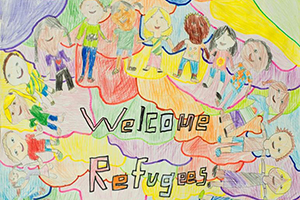 The exhibition is part of a growing visual dialogue describing multiculturalism, anti-racism and human rights, and celebrating cultural diversity.

Students from primary to tertiary level have created posters that celebrate the UN International Refugee Convention by communicating how refugees are welcomed, become part of, or contribute to the Australian "family".

Presented by The Bob Hawke Prime Ministerial Centre, the Migrant Resource Centre of SA and the UniSA's School of Art, Architecture and Design 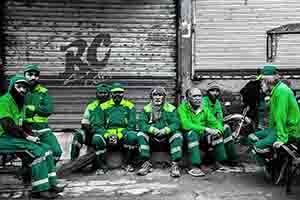 This exhibition of paintings, sculpture and installation by emerging artist, Nazia Ejaz, is an exploration of space and the duality of being either within or without, here and there, both connected and separate.

Jaali, is a perforated stone or lattice screen or web like structure that is a feature of Indo-Islamic Architecture.  These screens are used for separation, for demarcating a space, to form boundaries, to shroud and reveal, depending on the perspective of the viewer.

The artist uses this reference to engage the politics of representation and of participation and exclusion. 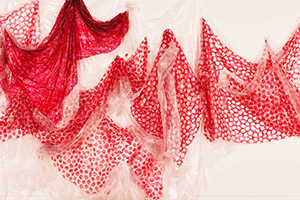 I am deeply interested in the binaries that act as filters and permeate multiple levels of our social perceptions and interactions.

I am influenced by a complex system of an unconsciously acquired bias, manipulated by historical, cultural and ethnic affiliations, economics and media.  In a desire to belong to a group we tend to distance ourselves from the ‘other’ while our response to that which is different defines who we are.

In Urdu, the word Jaali has a dual meaning.  While it literally means ‘fine web’, it also implies something that is ‘counterfeit’ or ‘fake’.  The interconnected and symmetrical structure of the screen creates awareness of a space beyond the gaze but obstructs it at the same time.  The interplay of darkness and light de-centres conventional forms of seeing, looking and representing.

My work attempts to explore these points of separation. 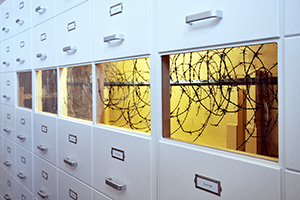 Two artists, 2015 Synapse resident Eugenie Lee and 2014 Synapse recipient Cat Jones, have worked with Professor Lorimer Moseley investigating and contributing to the work being undertaken by the Body in Mind research team. Eugenie is an accomplished visual and installation artist http://eugenielee.com/ and Cat an established performance and interdisciplinary artist http://catjones.net/. A third artist, who has also worked with pain researchers in clinical settings, is interactive and media artist George Poonkhin Khut http://georgekhut.com/brighthearts/.

Each of the three artists have created very different, but thematically-aligned works concerned with the experience of pain and its possible management.

Timed to coincide with National Pain Week, the exhibition was framed by public presentations, led by Professor Moseley, and discussing contemporary pain research and its implications.

Cat Jones’ work, Somatic Drifts, has been supported by the Australian government through the Australia Council its arts funding and advisory body; Bundanon Trust AIR; Creative Practice Lab, School of the Arts and Media, UNSW; Adhocracy 2014, Vitalstatistix; and Waverley Studio AIR and SymbioticA. Research for this project has been supported by an ANAT Synapse Residency with UWA School of Medicine and Pharmacology and UNISA, Sansom Institute, Body in Mind. 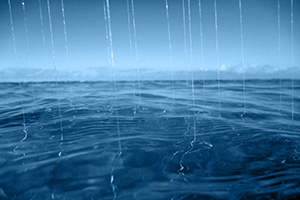 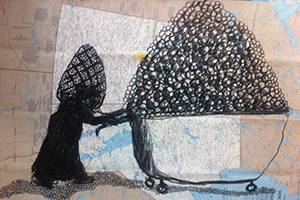 Landscape of Longing explores the richness of the world of Australian-Indonesian artist, Jumaadi.

The exhibition presents a series of recent works, playful yet tormenting, shaped by external forces yet representative of Jumaadi’s inner world. His silent imagery speaks to our sense of stillness while begging us to question our present.

Jumaadi is a Sydney based artist, originally from Sidoarjo, East Java, Indonesia and trained at the National Art School, Sydney, where he commenced his professional practice.  More information 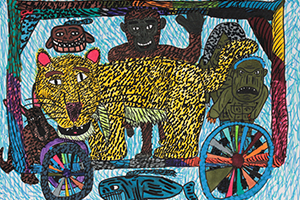 The Story behind Shedding Light
9 - 30 September

Tutti Arts exhibition 'The Story behind Shedding Light' reveals the evolution of a two year intercultural collaboration between disabled artists and activists in South Australia and Indonesia who discovered common ground through an increasingly globalised disability culture.  The exhibition chronicles the process and outcomes of these relationships through an installation which combines a series of candid interviews, animations, and mixed media artworks. Unseen, unexpected and unapologetic, this work abandons stereotypes and claims a space for people with different perspectives.

Presented by The Bob Hawke Prime Ministerial Centre and Tutti Arts.
Partners include Flinders University Centre for Asian Studies and The Australian Indonesian Association SA. Perspektif and SIGAB in Yogyakarta.

Are you wearing a slave? An exhibition for the abolition of slavery
7 - 30 October 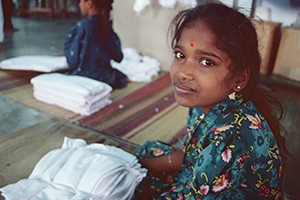 Slave making absorbs men, women and children into servile work and bondage. Cases of slavery have been found in Australia. This exhibition illustrates how Australia is exposed to modern slavery through our international supply chains and through slave-making in our own country. It includes posters and slide shows to illustrate how slavery operates, how it can penetrate Australian supply chains and what legal protections are available in Australia. An information kiosk encourages visitors to explore some of the Treaties which operate in the region. These Treaties offer legal protection for domestic workers, child workers and people subject to forced labour. The exhibition by Slavery Links Australia builds on an address given at The Hawke Prime Ministerial Centre on 3 December 2014.  Photo credit: International labour Organisation: Work in Freedom series. 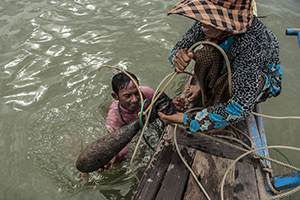 It's been more than 35 years since the Khmer Rouge regime collapsed. During its brief rule of Cambodia - less than four years - an estimated two million people died; hundreds of thousands were also killed during the civil war that preceded and followed Pol Pot's brutal 1975-79 regime.

"Dark Water" documents the formation of Cambodia's UXO Salvage Diver Unit tasked with clearing the rivers and lakes of The Kingdom of UXO left from years of conflict and Civil War. More information 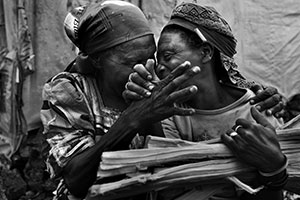 One Thousand Lifetimes in One Lifetime
4 November - 9 December

As an exploration into the darkest hours of a person’s life, when war, conflict and tragedy overlay their existence, ‘One Thousand Lifetimes in One Lifetime’, showcases the resilience of those whose lives are caught in their ceaseless rebuilding of hopes, dreams and future.

Esteemed Fairfax photojournalist Kate Geraghty brings us to the war-torn North Kivu province of the Democratic Republic of Congo, where sexual violence is a devastating weapon used by the Congolese army and rebel groups. These images portray the human side to the story, those whom have been most affected.

Barat Ali Batoor showcases “Hazara Exodus”, which takes us on the perilous asylum seeker journey from Afghanistan to Australia, whereby he shot images which capture the long route through Thailand, Malaysia, Indonesia and then by sea to Australia. From this photographic series Batoor was the recipient of two prestigious Nikon Walkely awards in 2013, and has been regarded as being a unique viewpoint into a voyage which not only holds great risk but which has killed many people fleeing from persecution. 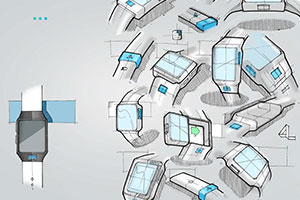 Presented with the School of Art, Architecture and Design, UniSA