Using the idea of the most ubiquitous of all interior elements, the table, the exhibition will reveal the political meanings and provocations of interior space - from the domestic to the workplace; from the civic to the commercial - with source material drawn from the Louis Laybourne Smith School of Architecture and Design's Architecture Museum.

To celebrate the 30th year of UNIFEM's existence, UNIFEM Australia produced a photographic exhibition of prominent Australian women entitled Powerful Women.  The exhibition includes portraits of 30 Australian women working in various areas of the community, business, politics and the arts, celebrating their contribution to the advancement of women in Australia and overseas.

The exhibition's photographer is prominent Sydney-based photographer Yann Le Berre. Originally from Paris, Yann has worked as a photographer for the last 15 years and Powerful Women will be his second major exhibition.  Follow the link for information on each photograph. 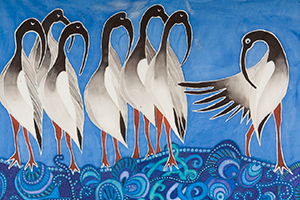 This exhibition represents a collection of artworks depicting Aboriginal lore, culture, tradition and reconciliation in a combination of silk and paper.  Part of the Adelaide Fringe Festival.

Birrung Gallery is a World Vision Australia initiative that provides unique Indigenous artwork to collectors and art lovers around the world.

Through the sale of fine arts, Birrung Gallery raises funds for Indigenous community development, including employment training at their Sydney gallery, scholarships for Indigenous students and preventative health, social, cultural, economic and governance activities in rural and remote Australia.  Birrung also advocates for the rights of Indigenous artists through such avenues as the 2007 Senate Inquiry in to the Indigenous Arts Industry.

SABAN is a unique and innovative global network promoting South Australia as a great place to: live, visit, study, work, invest, and do business. SABAN was formed in 1998 and is a non political program belonging to the Premier of the Day.  The network has over 200 members located in South Australia, Interstate and over 20 countries around the world.  This exhibition celebrates and acknowledges the contribution of our goodwill business ambassadors, who over the last ten years, have used their spheres of influence and personal connections to identity or create business opportunities to benefit the State.

This exhibition of non traditional portraits and reflective words pays tribute to the SABAN "class of 2006" who in 2008 complete their first 2 year term as SA Business Ambassadors.

About the Exhibition: Words By Heidi Linehan
I feel very privileged to have been involved with this project, the "Many Parts of the SABAN" picture exhibition. When photographing the SA Business Ambassadors, I tried to make the image look compelling and artistic, not just as a 'year book' documentary.  The use of hard lighting, deep shadows and curious expressions add to the depth and sensitivity of each subject.  Black and white imagery takes it down to basics, no hiding behind colours, just bold features. It's serious and playful!! 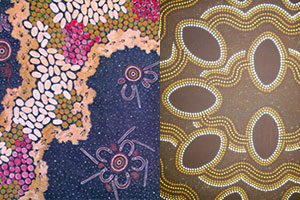 This exhibition will focus on the promotion of Artists within South Australia - their home base.

Black White Cockatoo Pty Ltd is a multi dimensional company that promotes the rich living culture of the Aboriginal people, the first Australians.

It specialise in promoting and providing a rich cultural experience to the International arena to enable people to experience the spiritual essence of Aboriginal culture. The platform of Black White Cockatoo is also learn, share and promote a cross cultural experience with other Indigenous cultures of the world.

Black White Cockatoo deals in contemporary and traditional Aboriginal arts and culture partnerships with Communities. The Company bases its business on the relationships it has built with the many Aboriginal artists across Australia.

Aboriginal art is unique and can be easily identified through the different techniques used. Each artwork has a different meaning or tells a story.

An artist's origin and background can be determined by the style of their artwork.

"Aboriginal art is the language of the landscape and the land is what we belong to, it is our past our present and our future. We belong to the land and the land is our mother." Paul Vandenbergh and Che Cockatoo-Collins, Directors, Black White Cockatoo Pty Ltd. 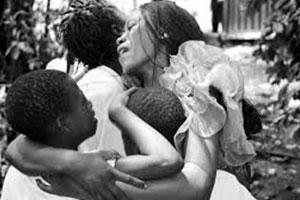 Armed conflicts and their aftermath impact upon women deeply and the human cost is enormous. In a moving exploration of the ways in which women, their families and communities are affected by war, the International Committee of the Red Cross (the ICRC) has produced this exhibition.

The colour and black and white photographs from around the world reveal women experience wars in a myriad of ways that include displacement, lack of physical safety, loss of access to resources and contact with relatives. The exhibition also deals with the issues of women's health and sexual violence, detainees and international humanitarian law - rules that in wartime protect people not participating in hostilities.

Proudly brought to you in Adelaide by Australian Red Cross and The Hawke Centre, the exhibition will be launched immediately following the related seminar on the 10 year anniversary of the International Criminal Court.

Tina Dolgopol will launch the exhibition. 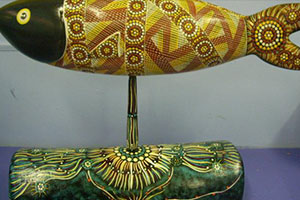 Waralungku Arts is an Aboriginal arts cooperative based at Borroloola in the Northern Territory. It has often been said jokingly that Borroloola is the furthest place to which an Australian can travel without a passport. The stereotypes about Borroloola's remoteness and marginality are misleading. The town, beside the Macarthur River, is a complex cultural as well as geographical crossing point: between Gulf and dryland cultural practices, between different language groups, between Indigenous and European people, between traditional knowledge systems and new youth cultures.

The opening of this exhibition of Waralungku art coincides with an all-day symposium at UniSA's Bradley Forum, Reclaiming the Centre: Art, Technology, and Community in Outback South Australia and the Northern Territory (Friday 19 September 2008), which will look broadly at how local energies are being translated into sustainable futures for remote Aboriginal communities. Waralungku Crossing echoes these broader themes, but the exhibition's focus is cross-generational exchange. The exhibition, which comprises works by established local artists and young emerging artists, attests to the energy with which Waralungku Arts (supported over the past two years by the Telstra Foundation) has developed cross-overs between the custodians of customary knowledge and young people in the community. 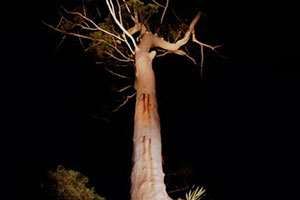 The Undercurrent artist collective aims to contribute to the ongoing development of critical and aesthetic debate concerning contemporary photo-media practice by engaging with photo-media artists, curators, writers and others across all borders (national and international).

Undercurrent seeks to develop a broader audience and create a greater understanding and awareness of various photo-media practices through the process of exhibitions, artists talks and critical writing.

For 2008 the Undercurrent collective has invited Queensland photographer Marian Drew as a special guest to participate in an exhibition exploring and constructing new relationships to landscape through photography; reflecting a changed viewpoint or orientation to landscape.

Ongoing dialogue and critical reflection among peers has been intrinsic to the development of Undercurrent 2008: Underlying Landscape. Each artist, including Marian Drew has responded to this thematic direction with new work. An introductory essay to preface the exhibition has been written by Gordon Craig, Exhibitions Coordinator, University of Queensland Art Museum.

ID8 is a showcase of the 2008 final year UniSA Industrial Design students' work during their time in the program. The Industrial Design program at UniSA teaches students how to develop solutions for everyday tasks. Examples of work exhibited this year include kids' furniture, a glider training simulator, modular kitchen space, car concepts for 2020 and many more!

Exhibition details and student profiles can be viewed at www.id8.net.au