The Garnaut Climate Change Review advised that it was in Australia's national interest to seek an ambitious international agreement on climate change mitigation, with Australia playing its full proportionate part. The 2009 Hawke Lecture discusses the elements of an international agreement in Copenhagen in December 2009 that would meet Australia's national interest. It addresses the difficulties of governments pursuing policies in the national interest when these are in conflict with powerful private interests. Comparisons are made between the history of Australian trade policy in the twentieth century and climate change policy now. 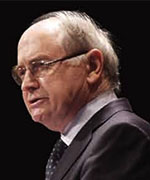 Professor Ross Garnaut (AO) is a Vice Chancellor's Fellow and a Professorial Fellow in Economics at the University of Melbourne as well as a Distinguished Professor of the Australian National University.

He is currently Chairman of a number of international companies and research organisations, including the International Food Policy Research Institute (Washington DC) and the Papua New Guinea Sustainable Development Program Limited (Singapore). In addition, he is a director of Ok Tedi Mining Limited (Papua New Guinea) and a member of the board of several several international research institutions, including the Lowy Institute for International Policy (Sydney), AsiaLink (Melbourne), the Centre for Strategic and International Studies (Jakarta) and the China Centre for Economic Research at Peking University (Beijing).

Professor Garnaut is the author of numerous books, monographs and articles in scholarly journals on international economics, public finance and economic development, particularly in relation to East Asia and the Southwest Pacific.

In addition to his distinguished academic career, Professor Garnaut has also had longstanding and successful roles as policy advisor, diplomat and businessman. He was the Senior Economic Adviser to Australian Prime Minister RJL. Hawke from 1983 to 1985 and subsequently served as the Australian Ambassador to China (1985 to 1988).

In September 2008, Professor Garnaut presented the Garnaut Climate Change Review to the Australian Prime Minister. This review, commissioned by the Australian government, examines the impact of climate change on the Australian economy and provides potential medium to long-term policies to ameliorate these.